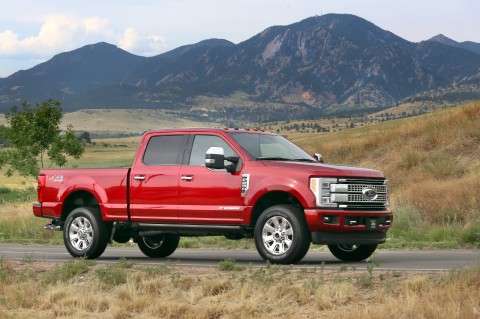 Ford and its parts division Motorcraft have issued new recommendations about which oil can be used in its diesel F-series trucks. The advisory warns against using CK-4 motor oils.
Advertisement

Ford issued a statement saying in part, “Ford will not be recommending the use of CK-4 motor oils in any Ford diesel engines, new or old. Ford testing has shown some CK-4 type formulations have shown inadequate wear protection compared to CJ-4 formulations developed and licensed before 2016. Ford now recommends using oils that meet our OEM specification, Ford Material Engineering Specification WSS-M2C171-F1.”

Kevin Ferrick, Sr. Manager of the AOI Engine Oil Program says, "API works with engine manufacturers to set motor oil standards like CK-4, and we license oils proven to meet the standards. However, OEMs, not API, are responsible for recommending the use of oils meeting specific our standards. In this case, Ford has chosen to continue to recommend CJ-4 oils."

Ford is instead recommending a new formula that includes the properties of CK-4 motor oils plus additives for greater engine protection.
It is not unusual for an OEM to recommend that people use only their products. What is unusual, is that Ford is saying that it would be better to use CJ-4, an older formula, than the CK-4 oil. According to the Ford statement, “Years of experience and Ford testing has shown that these older CJ-4 formulations provide the necessary engine protection in all Ford diesel engines where CJ-4 and older C categories are recommended.”

It is very odd for an automaker to warn against using something, when it doesn’t have the replacement available yet. A Ford insider tells me "Motorcraft did share the new oil recommendation with dealers prior to the new Motorcraft oil becoming available in order to protect the best interest of Ford customers. The notice also directed customers to continue using the old CJ 4 oil until the new Motorcraft oil arrived on dealer shelves."

The F-series is the most important product that Ford has in its fleet and the Super Duty diesels are truly the workhorses. Ford is obviously concerned about the motor oil allowing any engine to be damaged, even though the oil was approved by the American Petroleum Institute.

Follow Mary Conway at @maryconwaymedia and send her car news tips for future stories. Read most of Mary's stories at Torque News Ford and Dodge reporting.

Kevin Ferrick wrote on March 13, 2017 - 8:03am Permalink
Dear Ms. Conway, Drivers of Ford pickups with diesel engines should certainly follow Ford's motor oil recommendations, but I do believe you need to make one change to your article. API works with engine manufacturers to set motor oil standards like CK-4, and we license oils proven to meet the standards. However, OEMs, not API, are responsible for recommending the use of oils meeting specific our standards. In this case, Ford has chosen to continue to recommend CJ-4 oils. Kevin Ferrick Sr. Manager, API Engine Oil Program
Mary Conway wrote on March 13, 2017 - 5:38pm Permalink
Thanks, Kevin. I really appreciate you getting in contact. Please note that I have included your entire comment in the updated article. Please let me know any story ideas any time!
Lupe Jalomo wrote on October 26, 2017 - 4:13pm Permalink
I just got an oil change on my diesel truck 2016 f-350 . When I got home I realized they had put a 10-30 API c-j 4 diesel oil will this cause a problem
Philip Troutner wrote on October 17, 2018 - 9:02am Permalink
Confused about what oil to use in my 2018 Ford Super Duty with 6.7 Diesel. I purchased the oil upgrade from my dealer to use Full Synthetic 5W-40 at a cost of $800.00 My first 2 oil changes they put in 10W30 semi Synthetic. The Dealer I took it to, to have the oil changed told me they don't have a Full Synthetic oil for Diesel engine. There parts department has a Motocraft SAE 5W-40 Full Synthetic Diesel Motor Oil for Power Stroke Diesel. The Service manager told me this was for the 3.0 Power Stroke that is coming out in the New F-150's. and not for the 6.7 I have checked and found that that oil is a CJ-4 oil that Meets the WSS-M2C171-E and not the CK-4 with the WSS-M2C171-F1 My question is, is it ok to use the 5W-40 Full Synthetic that is a CJ-4 that meets the WSS-M2C171-E
Don Holloway wrote on December 5, 2019 - 5:16pm Permalink
Mr. Kevin Ferrick, Sr, how can I find out if your standard WSS M2C 925a is still current or replaced? If still current, how can I find available automotive oil products that meet this standard. Thanks for your time Don
Robert Laurie wrote on November 23, 2020 - 4:59pm Permalink
Usually have my dealer do oil changes on my 2011, 6.7 diesel. Took it to my tire dealer instead to hurry the process, in order to park the truck for the winter. They ended up putting in possible gas engine oil. They have on the work order: 5qts synthetic, 8qts oil. They told me what they put in was from a list of approved oil for that motor, and said the weights, but I forget what they were. If this is reg engine oil, am I ok to use it, or get it changed in the spring when I start using the truck again? Thank you for your time