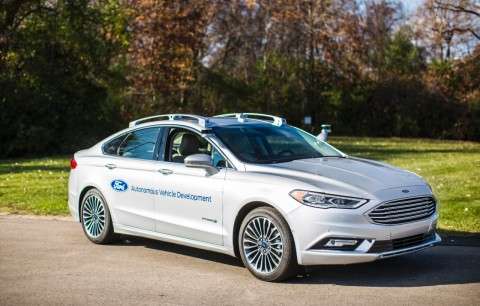 Ford announced today that its newest generation of self-driving Fusion Hybrids will debut at the Consumer Electronics Show and be on display at the North American International Auto Show.
Advertisement

Ford is unveiling photos of its latest self-driving Fusion Hybrid and says that people will able to see the next-generation vehicle in person at the Consumer Electronics Show, in Las Vegas and at the North American International Auto Show, in Detroit. The latest autonomous Fusion Hybrid looks surprisingly like the regular Fusion Hybrid. The sensors, radar and monitors are less noticeable.

In blog, Ford’s Autonomous Vehicle Chief Program Engineer, Chris Brewer, outlines plans to accelerate the self- driving program. “An expanded fleet is accelerating our real-world testing already taking place on the roads in Michigan, California and Arizona. We plan to grow the fleet even more, tripling its size to about 90 cars in the new year.”

Brewer says that they have been testing the original generation of Fusion Hybrid vehicles for three now, and that the vehicle they released pictures of today builds on everything they have learned. Much like any computer or electronic gadget, the latest generation is quicker, sleeker and more powerful.

“This new car uses the current Ford autonomous vehicle platform, but ups the processing power with new computer hardware. Electrical controls are closer to production-ready, and adjustments to the sensor technology, including placement, allow the car to better see what’s around it. New LiDAR sensors have a sleeker design and more targeted field of vision, which enables the car to now use just two sensors rather than four, while still getting just as much data.”

Brewer says that every vehicle maker’s biggest challenge is trying to create a car that replicates what a human would do. They have to teach the virtual driver to learn in complex situations and act appropriately. Ford has said that it will have autonomous vehicles, without pedals and steering wheels, ready to hit the streets by 2021. These Fusion Hybrids have drivers behind the wheels ready to take over in the case of errors or dangerous driving situations.

According to Brewer’s blog post, Ford’s autonomous Fusion Hybrids rely heavily on two “hockey-puck-sized LiDAR sensors, each generating millions of beams,” which providing a 360-degree view around the car These new sensors “see” roughly the length of two football fields in every direction. The LiDAR tells the car where an object is, how big it is, and what it looks like. That helps the vehicle’s computer determine what action it needs to take. Cameras mounted in the roof also read traffic lights and signs, feeding even more information into the on-board computer. Short and long distance radar also give the computer added information on the vehicle’s surroundings.

Ford’s first fully autonomous vehicles will be for ride-sharing and ride-hailing services. Tesla is also charging ahead with its autonomous vehicle program and General Motors announced that it will be aggressively testing the new Bolt as a self-driving vehicle.