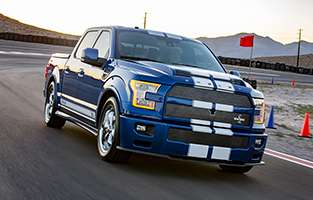 You may have heard all the talk about the Shelby wide body Super Snake, but the iconic performance car company is also producing a limited number of 2017 F-150 Super Snake trucks to drool over.
Advertisement

The 2017 Shelby F-150 Super Snake builds on the Ford 5.0L V8 with a supercharger to produce over 750 horsepower. Shelby and Ford have cooperated over the years to market some of the most iconic cars in history. The Shelby GT350 and GT500 have truly withstood the test of time. Racer Carroll Shelby loved speed and knew that vehicle lovers crave it as well. Probably best known for the Shelby Cobra, he later partnered with Ford on the GT40 program and the Mustang-based performance cars. Despite Carroll’s death in 2012, his company Shelby American, located in Las Vegas, still manufactures some of the most desirable high-horsepower vehicles in America.

There is something about the double white stripe that screams Shelby and the 2017 Shelby F-150 Super Snake wears the styling throughout. This truck sports a different hood, rockers, spoilers, grills and rear bumper.

Special Super Snake decals and badges are visible outside the vehicle while inside has special detailing on the seats, dash and floor.

The 2017 Shelby F-150 Super Snake will feature 22” Shelby Chrome wheels with performance tires. It will be available in 2x4 and 4x4 configurations. It will have a Shelby tuned and lowered suspension, Shelby by Borla exhaust and polished SST Dual Exhaust tips.

The cost to own one of the limited edition 750 horsepower behemoths is steep. The Super Snake trucks will start at $96,680. That is a ton of money for a rear or all-wheel-drive Super Crew. That is why many people can only dream about the 2017 Shelby F-150 Super Snake, but what a great dream!