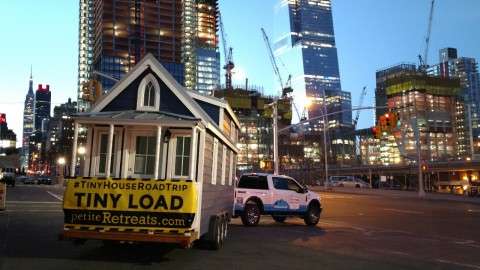 Ford Motor is trying to win over the heart of Millenials using its 2017 F-150 to haul two tiny houses across America on a road trip.
Advertisement

Millenials appear to be caught up in the tiny house craze. Many are drawn to the micro-homes because they are less expensive. Others are enthralled with them because they can have their own small space and not be responsible for so many of the trappings that their parents cherished. Smaller spaces often mean smaller responsibilities.

Ford intends to show Millenials and everyone else the effectiveness of their most popular vehicle, the F-Series, while it takes two tiny houses on a cross-country road trip.

Petite Retreats is a vacation company that allows people to book a range of unique vacation rentals, including tiny houses, cozy cabins, yurts and other eclectic abodes, including tepees. Two of their latest destinations are tiny houses named Henry and Clara, after the Ford founder and his wife. According to the news release, “Henry,” featuring 181 square feet and weighing more than 9,000 pounds, and “Clara,” with 252 square feet and weighing more than 12,000 pounds, will be pulled by the all-new 2017 F-150 and F-250 Super Duty respectively.”

The tiny homes began their trek in New York, at the auto show. The tiny vacation destinations will be hauled cross country, allowing vacationers to rent them in a variety of locations.

At this point, the Henry and Clara road trip will include Boston and Philadelphia. Petite Retreats is not yet releasing the other destinations.

The unusual vacations are a great way for people who may not have a vehicle, to learn about what is available to them. This is the same reason that automakers provide vehicles to rental car fleets. Millenials or other city dwellers may not need a car, truck or SUV right now. However, as their life changes and they perhaps have children or move to a suburb, they will remember the rental that was comfortable or met their unique needs.

If these people are experiencing the great outdoors for the first time, it makes sense that any automaker wants to be part of that memorable experience.

Henry and Clara are described as being loaded with amenities despite their small sizes. Ford is hoping enjoyable vacations will translate down the road to vehicle sales.

Soakee wrote on April 20, 2017 - 10:31am Permalink
I think I'd rather have an AirStream rather than one of these tiny houses. AirStreams are much more aerodynamic and actually built to be hauled around.
Mary Conway wrote on April 20, 2017 - 11:18am Permalink
I think they are just hauling them for this summer. I imagine they will take them to spectacular locations and let people rent them for vacations. No word on where they will end up staying. Thanks for reading the article and checking in!