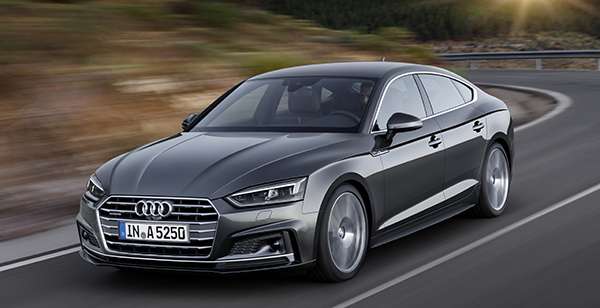 Audi Reveals A5 and S5 Sportback, May Come To The U.S.

When Audi revealed the second-generation A5 coupe a couple months back, we knew in due course that the A5 Sportback would be revealed. Sure enough, Audi spilled the beans on the 2017 A5 Sportback this week.
Advertisement

If you were to take an Audi A7 and hit it with a shrink ray, you would have the A5 Sportback. Like the coupe, the updated Sportback gets a new grille, updated headlights, a revised character line along the side, and updated rear end styling. Evolution and not revolution perfectly encapsulates the A5's overall design.

The interior is much the same as the new A5 with a clean design, more passenger space, an 8.3-inch screen with the latest version of Audi's MMI system, and the option of Audi's Virtual Cockpit - replaces the standard instrument cluster with a 12.3-inch screen.

The A5 Sportback uses the new MLB Evo platform that underpins the A4 and Q7. A key benefit of using this new platform is weight loss. Compared to the outgoing A5 Sportback, the new model weighs 190 pounds less. In terms of engines, the European-market A5 Sportback will come with the choice of two gas, three diesel, and Audi's g-tron (can run on gas, natural gas, or Audi's e-gas synthetic fuel) engines. Transmissions include a six-speed manual, seven-speed dual-clutch, or eight-speed automatic. Front-wheel or quattro all-wheel drive get all of the power down to the road.

Wanting a bit more performance? Then step up to the S5 which features a 3.0L turbocharged V6 with 354 horsepower and 396 pound-feet of torque. This is paired with an eight-speed automatic and quattro all-wheel drive.

Audi will be showing off the 2017 A5 Sportback lineup at the Paris Motor Show later this month. Sales kick off in Europe towards the end of the year. Will we see the A5 Sportback in the U.S.? That is currently being decided at the moment. But as we reported back in March, Audi of America President Scott Keogh hinted at an another A5 variant. It might be the Sportback.