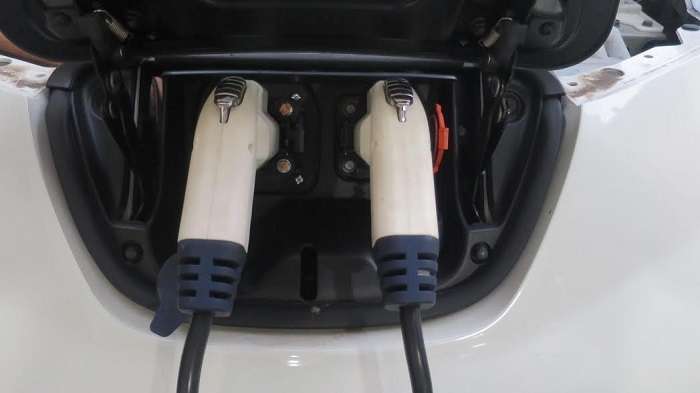 Some Nissan Leaf owners like modifying their EV using various techniques. If you have ever considered modifying your Nissan Leaf, how much has it cost? Nothing has been modified in a Nissan Leaf like this.
Advertisement

Everybody that loves their cars has a habit of wanting to do things to it to make it better. Whether or not you put steering wheel covers on your steering wheel or put custom hubcaps on or invested in chrome plated rims, everyone gets involved at some point pimping their rides. In the past we didn’t have access to electric cars and most people just did a little bit of customization to make things their own. The gassers have lots of choices to modify their cars engines, to customizing the sound their tailpipes make to annoy all the EV drivers but the EV drivers are somewhat limited when it comes to mass customization of their Nissan Leaf. If not like you can get a new carborator upgrade or special tune up to make the car go faster or do anything besides the programming it came with.. or can you?

I wrote about the Brusa charger upgrade last week and recommend reading that. Additionally, there are some electric cars that are appreciating in prices lately and I recommend you take a look at this article as well.

I also am a big fan of meeting people on social media that have “like” type interests. As a result of my common Facebook groups, I’ve met some very interesting people that I have been inspired by over the years. One of the most recent ones was a gentleman from Australia that has done some significant modifications to his 2012 Nissan Leaf. Some of the improvements are that he has added in a Brusa Charger to supplement the stock charger in the car. He has relocated the CHAdeMo inlet to underneath the hood of the car and purchased a portable CHAdeMo charger for home and away from home use. I must say, his upgrades have inspired me to say that the 2012 and 2011 versions of the car truly can be upgraded to higher standards. Here is an additional story on a specific one you might want to try.

So after meeting Greg on one of the Nissan Leaf groups on Facebook, I started a private conversation with him via email to inquire further about this modifications to his Nissan Leaf. Here is one of his responses that I’m going to share with you as he describes the new setup under the front charging hood of the Nissan Leaf:

The 2012 model LEAF has a onboard 3.7kw charger, so by adding the Brusa in parallel I can halve the recharge time 7Kw. since Australia has a 240 volt power with 10 and 15 amp outlets commonly available.

I can roll up at a ChargePoint CT4000 and plug a J1772 into each socket when I am out and about or when I am at home I can plug my hardwired EVSE into the original J1772 inlet and a 15 amp EVSE into a outlet and plug it into the second inlet to power the Brusa.
Another option, is to use two Tesla destination chargers with modified Type 2>type 1 adapters to power both chargers. “

Now that might be super technical for some of you but for the passionate Nissan Leaf driver this is really impressive. He has managed to decreased the charging time of this Leaf to faster than the upgraded Nissan Leaf 2013 onboard charger that charges at 6.6 kw . For those road warriors out there that have attempted their fate with reckless abandon to face their own range anxiety fear, Greg has pushed this fear far away. He can take advantage of even Tesla destination chargers on his travels.