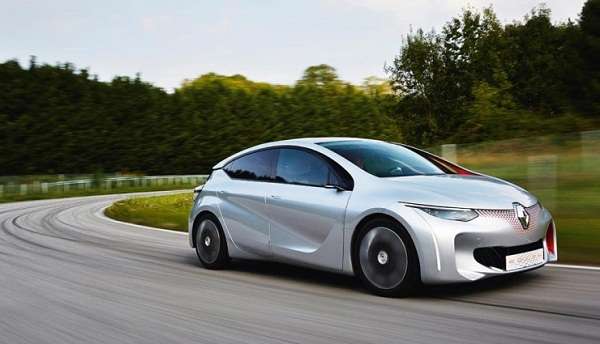 Step aside, Volkswagen with your landmark XL1. The Renault Eolab achieves similar efficiency benefits in the form of a more practical hatchback – though it may be a while before a similar version hits the States.
Advertisement

How does 282 miles per gallon sound?

That’s what Renault, partner in the Renault-Nissan alliance, claims its Eolab plug-in hybrid prototype can achieve. The futuristic hatchback resembling a cross between a Hyundai Veloster and a Toyota Prius C, to be unveiled in both concept car and functional prototype form at the 2014 Paris Motor Show, is truly the ultimate achievement in efficiency as we know it today.

Granted, the claimed 282 miles per gallon is based on the fuel consumption rates on the moderate European NEDC cycle. It also assumes the first 40 miles are driven on electricity, an electric range that like the overall MPG would not be quite as impressive after EPA testing. In short, it’s not entirely truthful.

Nevertheless, 282 miles per gallon is quite a bit more than today’s vehicles are capable of. It is in the territory of the ultra-expensive, ultra-efficient, ultra-impractical Volkswagen XL1. How did Renault do it?

The Renault Eolab sheds a phenomenal 880 pounds compared to a similarly sized vehicle. Think the Ford F-150 losing 700 pounds from a 5,000-pound vehicle is impressive? Try dropping from 3,000 pounds to a scant 2,100. This achievement in lightweighting is due to an assortment of measures ranging from a feathery 8-pound magnesium roof to composites to a 28-pound reduction in the brakes alone.

We suggest a background course on mass decompounding to help make sense of the weight engineering behind this car.

Of course, shedding weight alone isn’t enough. The Eolab also boasts a tiny drag coefficient of 0.235, which would be tops among all current production cars, with an active air suspension and active wheel shutters to maximize aerodynamics at highway driving.

Every vehicle also loses energy to rolling resistance, so Michelin created a tire for the Eolab narrower than that of an i3 for unparalleled efficiency while still providing sufficient grip to satisfy the critics at Top Gear.

And of course, 282 MPG is not achievable without electrification. The Eolab makes use of a 6.7 kWh battery pack powering a 67-hp electric motor with 150 lb-ft of available torque at the front wheels, while a tiny 1.0L three-cylinder engine produces 75 hp and 75 lb-ft of torque when needed. Top speed in EV mode is allegedly 75 mph, with a range in the neighborhood of 40 miles on that gentle NEDC cycle.

Head on over to InsideEVs to get the full specs if you like.

Will we ever see this car again?

Of course, given the history of ambitious concept cars, all this technology begs the question: will it ever make it to production, in what volumes and where? Obviously, Renault does not sell vehicles in the United States. However, recent friction between the two automakers notwithstanding, Renault remains a partner with Nissan, which does in fact sell vehicles stateside.

Renault thinks the Eolab represents a realistic hatchback 10 years from now. This means we will see the dozens of fuel-saving technologies from the prototype gradually phased into Renault and Nissan vehicles in the coming years, with the ultimate fuel-sipper combining all of these innovations a decade or so from now.

Of course, most of the innovative technologies of the Eolab come with a high price tag. The hope is that integrating them into production cars gradually will lower costs by increasing their scale. An imperfect analogy we could look to for guidance: BMW and its use of carbon fiber parts in high-performance M-series vehicles, which gave the company invaluable experience in the design and manufacture of the material and eventually led to a huge investment in the i-line of carbon fiber intensive electric cars.

Interestingly, Nissan has hinted at future plug-in hybrid offerings of larger crossover-type vehicles that the company considers to be above the maximum weight threshold for viable all-electric transportation. Size aside, the Eolab could be a sign of things to come for Nissan as well as Renault, as we will almost surely see a plug-in hybrid from the Japanese automaker before 2020. No doubt Nissan will take a page out of partner Renault’s book – the French seem to have a few efficiency tricks up their sleeve.