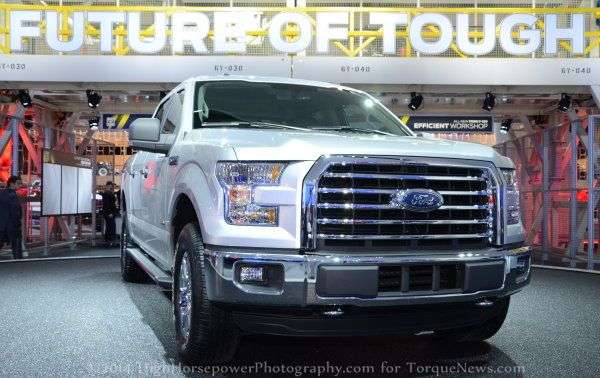 When the 2015 Ford F150 Succeeds, More Trucks Will Use Aluminum Very Soon

Ford Motor Company kind of shocked the world when they introduced the new 2015 Ford F150 pickup with a body that is comprised heavily of aluminum rather than steel and when (not if) the newest F150 succeeds – we will quickly see the competition follow suit as the other truck makers scramble to keep up with the bestselling truck in the world.
Advertisement

Metal alloys have come a very long way in the past decade so it really shouldn’t have been made such a negative key point for those critics of the 2015 Ford F150. Some people are concerned that the aluminum will be too soft to put up with the abuse faced by a proper pickup truck, but the F150 is unquestionably Ford Motor Company’s most important vehicle. Would they really build an F150 for 2015 that isnt going to stand up to normal truck use? The answer to that question is a resounding “no”.

Anyone who thinks that the next generation Ford F150 isn't going to sell and perform every bit as well as the current models should probably get their heads checked by a professional.

Aluminum Makes the Next F150 Even Better
The 2015 Ford F150 will almost surely offer significant improvements in every single measurement and because of that, we will see the sales numbers of America’s bestselling vehicle continue to shine into the 13th generation. The 2015 Ford F150 will be lighter, so it will offer better fuel economy and even if the engine lineup is identical, this lightweight body will improve performance and capabilities like hauling and towing.

The only concern of sorts is that the aluminum panels might be more likely to sustain little dents and dings – which Ford insists will not be the case. In this situation, I am inclined to believe the Motor Company because body panels on the world’s bestselling pickup that easily dent would obviously create a huge black eye for Ford…and that isn’t going to happen.

Ford Will Start Another Industry Trend
Of course, there will still be skeptics of the aluminum body panels on the new F150 for the first year or so, but after owners have logged a few million hard miles on the 2015 and 2016 F150, Ford will have once again proven that they know how to set an industry trend. I can guarantee that there are people high up at General Motors, the Chrysler Group, Toyota and Nissan who are closely monitoring the success of the aluminum bodied F150. In fact, I would bet my bottom dollar that at least one other company who participates in the full size truck race is already experimenting in their own aluminum body panels. As soon as Ford took the leap and introduced the 2015 F150 with the aluminum panels, competing engineers were surely quick to tear into their own aluminum bodies.

Should consumers praise the new alloy body – or even if the consumers don’t specifically complain about the aluminum body panels – other truck makers will introduce their own lightweight bodies within the next few years.

In the short term, I would expect the improved economy numbers and improved performance of the 2015 Ford F150 will cause an increase in sales while others are attracted to the new high tech exterior design.

The 2015 F150 isn’t as pretty as the Atlas Concept, but this cutting edge design should attract new buyers while the impressive capabilities will keep cutting Ford truck buyers coming back for more. That will all lead to bigger sales numbers and I would go so far as to guarantee that at least one of the other trucks on the market will follow Ford’s lead within the next few years. With the Ram 1500 due for a significant refresh in the next few years and the Chrysler Group’s constant push to be on the cutting edge of truck technology, I would almost expect that the next generation Ram 1500 will be the first to join the Ford F150 in the use of aluminum body panels.

Collin wrote on June 17, 2014 - 8:12pm Permalink
I think you mean to say "will keep current Ford truck owners coming back for more" and not "cutting Ford truck buyers". :)
Richard Labrie wrote on July 4, 2014 - 2:34pm Permalink
The aluminum sceptics should be reminded that one of the safest vehicle called ''Airplane'' has been constructed with aluminum alloys for decades. I think that says it all about the material. Also, aluminum has a much easier recycling process than steel. Cheaper to transport because of its weight and has a far greater resistance to corrosion than steel.
Liz nuchia wrote on September 22, 2014 - 1:07pm Permalink
When will Ford Expedition have new 2015 F150 benefits?
Ricky Kise wrote on September 23, 2015 - 10:05am Permalink
People will buy anything that looks good, but just wait a few years. By the 20's, all the used steel cars and trucks will be as highly sought after as ammo was in '13. If I want a beer can, I'll go to Publix.You can get a low mileage used one for barely half the cost of a new one and, the engine is larger and not aluminum, nor is the body. But its not at all the industry or the company's fault. Obama's EPA is ruining every car and truck on the road and risking our lives with their fascist CAFE standards, and all you people in the media are sucking up to them (as usual). Aluminum is weaker than steel and cracks, and there is no permanent cure for the galvanics. And just wait for the insurance bill.