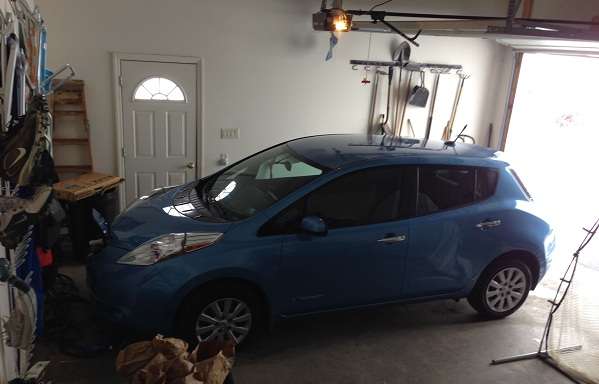 Why range anxiety is not a real problem

Range anxiety is often cited as one of the major reasons battery electric vehicles have yet to take off in the mass market. But does it actually exist in practice?
Advertisement

The phrase “range anxiety” typically refers to the worry that a battery electric vehicle – a Nissan LEAF, BMW i3, Chevrolet Spark, you name it – will run out of charge and leave you stranded by the side of the road.

It exists because no currently produced EV other than the Tesla Model S (which is capable of up to 295 miles of cruising range) can offer more than 93 miles of range per charge, which certainly poses some limitations on the utility of these cars.

A strong case can be made that anyone in the market for this type of electric vehicle will almost never actually experience the dreaded malaise of range anxiety, as the Rocky Mountain Institute recently pointed out. Here is why.

Even assuming that the average American drives 15,000 miles per year (the actual figure is closer to 13,000) this only equates to about 40 miles per day. And surely that yearly total normally includes a few lengthy road trips, which are not what today’s EVs are designed for, with the obvious exception of Model S.

So the actual daily figure in typical driving for the average American is even lower than 40 miles. Sure, some have long commutes for which, say, a Nissan LEAF (with an EPA-rated 84-mile range) would be impractical, but the vast majority will find that 80-odd miles is more than enough range for a day or two of driving.

In fact, according to data from the EV Project, on days the car is used LEAF drivers travel an average of about 30 miles per day with a mean trip distance of 7 miles.

What does this tell us?

Despite all the hand-wringing over range anxiety, the data clearly shows us that for drivers that actually own electric vehicles, range anxiety for all intents and purposes does not exist. For the rare foray far from home, EV drivers can take advantage of the growing public charging infrastructure.

That’s not to say the owner of a Nissan LEAF will never have to carefully plan a trip to avoid running out of battery – especially in winter, reduced driving range can pose a legitimate problem to the most careful of drivers.

But the larger point is that this type of electric vehicle is aimed at a certain niche, and a fairly huge one at that. The number of multi-car households in the United States is enormous, and most of these households have at least one vehicle that serves mainly as the around-town or commuter vehicle.

It is this application that electric cars like the Nissan LEAF are designed for – not to replace the family hauler or take on vacation, but to provide an incredibly efficient, clean, and satisfying way to get to and from work and around town. And for that purpose, electric vehicles are unmatched by any car with an internal combustion engine. Just ask their owners, who demonstrate staggering rates of owner satisfaction across the board.

To put it bluntly, if you buy a LEAF to drive it from San Francisco to Los Angeles, you’re clearly doing it wrong. Not that it isn’t possible – with California’s robust charging infrastructure, it actually wouldn’t be all that difficult – but it is not the car’s intended purpose, and people usually buy cars with their intended use in mind.

Bear with me as I provide the most convincing form of evidence (as long as the storyteller is in the room): an anecdote.

I was influential in my parents’ decision to lease a Nissan LEAF in January, and they have not regretted the decision. With two kids still at home, my parents both work 10-15 miles away and have a fair amount of chauffeuring and errands to do on the side. Since my father teaches at a university on the top of a frequently snowy mountain, my mother gets the LEAF as her daily driver, and she loves it.

My family has experienced range anxiety exactly twice in the last 10 months. Once, a miscommunication led to the car not being plugged in prior to my brother attempting a trip up the aforementioned mountain. With a half-full battery and not realizing the difference between the range estimator and battery state-of-charge estimator, he panicked as the range meter plunged on his way up and turned around to head for home rather than risk being stranded.

The other occasion was a case of poor planning. My father and brother attempted an ambitious 100-mile trip, with the intention of charging at a Nissan dealer for a few hours at their destination. The charging session was cut short when the dealer closed, however, and the trip home got very interesting. Hypermiling on the highway allowed them to make it to a local mall where they plugged in for a 20-minute trickle charge (the public charging infrastructure buildout has yet to spread to central Pennsylvania) before impatiently setting off for home, only to have the battery die at the bottom of the driveway. I think it is safe to say that anxiety was one of the emotions they experienced on that particular trip, but it was definitely avoidable.

To sum up, range anxiety is only fretted over by those that do not actually own electric vehicles. Those that take the plunge and purchase an EV to meet their needs, however, quickly discover that range anxiety is largely but a figment of the imagination.

Eric wrote on November 10, 2014 - 8:03am Permalink
Not sure if this is "range anxiety" per se, but as a curious/potential EV buyer my concern is with range variability e.g. with temperature, load, terrain etc... What's the worst case I should expect if I were, say, driving myself and 4 passengers in the winter in hilly PA? Is there a site that gives this sort of real information for various EVs? Likewise, how does battery capacity (realistically) decline with use?
Evan wrote on November 10, 2014 - 1:30pm Permalink
From what I've read (I'm not a current EV owner). Under an absolute worst case scenario (driving in the hills/mountains on a very cold day <0 F) the nissan leaf range will drop from 76 miles per charge to 50 miles per charge. That was with the older 2011/2012 versions though, it may have changed. Personally I'm waiting for the next version of the leaf or the Tesla Model 3, those will have significantly more range in the 2017/2018 time frame.
mike w wrote on November 10, 2014 - 7:13pm Permalink
At say -3F we get 25 miles on a full charge on my Leaf. To qualify that we do not have a battery heater so to get 25 miles we had to drive with the cabin heat turned OFF. The battery storage capacity will drop over time. Our Leaf is 3 years old and our battery is at 80% Our result are not typical but they are possible. Driving uphill will drain the battery more quickly. As far as variability goes A/C has little impact on range. We normally get 50 miles to the first low battery alarm in "good" weather.
Brian Keez wrote on November 10, 2014 - 10:51pm Permalink
Been driving electric for three years (LEAF). Go to mynissanleaf to get the best information on the EV experience.
VFanRJ wrote on November 10, 2014 - 9:15am Permalink
The two big variables are climate and battery degradation. I live in UT where it gets quite cold and hot. EV distances can vary quite a bit. Time will tell how much battery I have 5 years from now.
lda wrote on November 17, 2017 - 7:54am Permalink
Some other variables: * How much elevation gain or loss? ... a 1% grade makes a significant difference * Tolerance for cold cabin in winter and hot cabin in summer. * Base model S doesn't have more efficient heat-pump a/c and LED head-lights as standard. * Head winds hurt range, and to a lesser extent cross-winds. * wet roads increase rolling resistance, even if just damp
Steve wrote on November 11, 2014 - 8:53am Permalink
I Lease a 2013 Leaf. The key is to do your research. Look at your own driving patterns. Learn what the EV of your choice can actually do (get info someplace other than the dealer). Find out what the worse case is for that EV (hills + extreme cold). Will your driving pattern fit into that extreme? If not, can you reliably get a charge along your route ? I live in Michigan, my commute is ~30 miles a day 40 with errands. In summer I can get 80-90 miles of range @ 45-55MPH. When it was -15F last winter I got about 40-50 miles of range with heat on @ 45-55MPH.