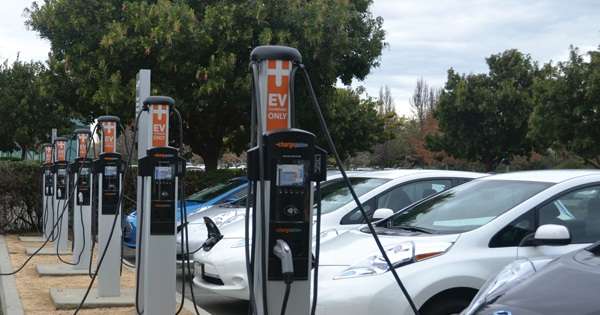 What the China-US climate change agreement means for electric cars

The big news yesterday was the revelation that, at long last, China and the United States reached an agreement on reducing greenhouse gas emissions.

President Barack Obama and President Xi Jingping concluded months of secret negotiations with a landmark deal. The United States agreed to cut climate change-causing greenhouse gas emissions by 26-28% from 2005 levels by 2025, while China agreed for the first time to have its emissions peak by 2030 and possibly sooner, with the goal of generating 20% of its energy from zero-carbon sources by that year.

While the world’s two largest economies combine to emit 45% of the world’s greenhouse gases, they have effectively done little to restrict emissions to date as each country argued that any mitigation efforts would be fruitless unless the other complies as well. The new agreement ends that game and many expect it will drive other countries to adopt similar mandates leading up to and following the climate summit in Paris in December 2015.

"People on both sides pointed to weak action abroad to delay action at home,” said Bob Perciasepe, president of the Center for Climate and Energy Solutions. “This announcement hopefully puts those excuses behind us. We'll only avert the worst risks of climate change by acting together."

Most view the agreement as an enormous step in the right direction, and one that was necessary if any meaningful action against climate change would be taken. It could prove to be the turning point in the struggle to mitigate the worst effects of present and future climate change.

Of course, Republicans like soon-to-be Senate Majority Leader Mitch McConnell and the likely chair of the Environment and Public Works Committee in the Senate, James Inhofe, quickly denounced the agreement and vowed to destabilize the EPA, personally put a lump of coal in President Obama’s stocking this year, etc.

But the global momentum generated by this agreement may be too much for Republican obstructionists to overcome, especially since the administration feels it can accomplish its goals using established authority under the Clean Air Act and related laws.

What does it mean for electric cars?

Okay, so what do greenhouse gas reductions mean for electric cars? For one thing, cleaning up the transportation sector (30% of total emissions in the U.S.) is a big part of reducing a nation’s climate footprint. We have seen that with the CAFE fuel economy standards. One of the most effective ways of making passenger cars more atmospherically friendly is to electrify them, as even running on existing U.S. grid electricity electric vehicles are substantially cleaner than most gasoline cars.

And with tougher restrictions on greenhouse gas emissions from the electricity generating sector, and increased implementation of solar and wind energy, driving an electric car will get significantly cleaner over the next decade.

This climate deal is perhaps most important in China, however. Experts say that reaching the new aggressive targets will require “an energy revolution,” including a complete overhaul of the existing coal-dominated economy. China has a real problem with current pollution levels: research from Tsinghua University estimates that 670,000 people die prematurely in China every year due to air pollution-related diseases. The smog problem is now the number one cause of social unrest in the country, and the government has become serious about cleaning up its air.

In recent years, a big part of the government's effort to curb urban air pollution has meant very favorable conditions for electric vehicles. The Chinese government as well as many provincial and city governments have offered generous incentives to encourage adoption of electric cars, and recently a jaw-dropping $16 billion investment in public charging infrastructure was rumored to be imminent.

To date these incentives have not translated to huge sales numbers, but many analysts (and carmakers) expect that to change. Over the next few decades, even as electric car adoption continues to increase in the United States, look for China to turn to the electric car as a way to cut urban air pollution while reducing its national carbon footprint as the grid powering those cars steadily cleans up its act.

If both countries come close to delivering on their promises, the atmosphere will be in much better shape in 2030 than it otherwise would have been – and quite a few satisfied electric car owners may be a corresponding pleasant result.

Todd wrote on November 13, 2014 - 11:19pm Permalink
Ah, nice attempt at cheer leading for a meaningless cause, i.e., against the non-problem of global warming; I mean....climate change. This "deal" is toothless: there is nothing binding whatsoever in it, it's only full of intentions that are 15 years away which will be long forgotten when Obama is out of office. Besides, do you really think a Republican house and Senate will pass any legislation that supports this? I have a bridge to sell you.....
Carl wrote on November 14, 2014 - 10:10am Permalink
Todd, how come you're denying a problem that's so obvious? The climate IS changing - just like it always does. Not particularly because man has anything to do with it, but that's beside the point. Remember, it's for the children! And if you like your doctor, you can keep your doctor.
Luke Ottaway wrote on November 14, 2014 - 5:11pm Permalink
Yeah, you're right. What does a globe full of scientists know anyway?
David wrote on November 14, 2014 - 10:34am Permalink
China has a good chance of keeping it's part of the bargain because it is building Nuclear power plants as quickly as possible. These are far safer than the previous generation (AP1000) and far cheaper than those built in the USA at about 2 dollars / watt. China is also investing a large amount of money in Nuclear reactor research again, far more than the USA. The USA in the mean time is charging $254 / hour per regulator for a 4 to 15 year process just to submit a new design for certification. Nuclear power is the only base load large scale power with no CO2 emissions.
Bill wrote on November 15, 2014 - 10:39am Permalink
Great deal for China, we pay all the costs, meanwhile they do nothing but promise to peak their emissions by 2030. If we cut our current emissions to zero today, how long before China increases their emissions to our current levels? I am sure it is before 2030. Pretty soon our electric rates will double or triple just like our health care insurance rates. Of course, the end justify the means!