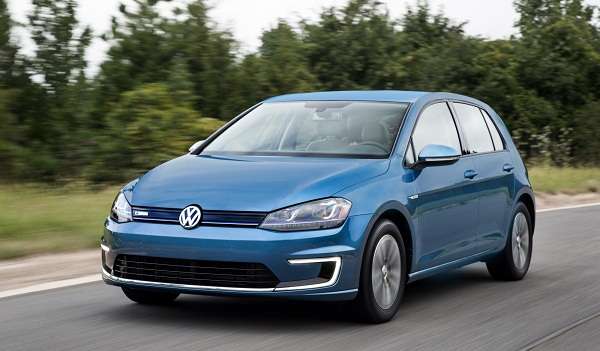 Any hopes that the Volkswagen e-Golf would distinguish itself from the EV pack with a surprisingly high electric range were quelled by the EPA as it released the official ratings. The numbers aren’t bad – they are just the same as everyone else.
Advertisement

For months, all Volkswagen would say about the range of its e-Golf for the U.S. market was “between 70 and 90 miles” depending on driving conditions. Just ahead of its November launch in the United States, the EPA has released the official rating of the Volkswagen e-Golf, and it fits right in with its competitors.

The e-Golf received an EPA rating of 83 miles combined, with a city range of 89 miles and a highway range of 75 miles. Its equivalent fuel economy numbers check in at 116 MPGe combined, calculated from 126 MPGe in the city and 105 MPGe on the highway.

As we have noted before, the EPA only reports a single range number on the window sticker for the sake of simplicity and to prevent information overload from scrambling the poor brains of potential car buyers. But considering that most electric vehicles exhibit the opposite characteristics of gasoline vehicles (that is, significantly greater efficiency and range in the city than on the highway), we think it would be extremely useful. That is why are reporting all three values here.

How does it compare?

The e-Golf posts very similar numbers to its chief rivals. Here they are, including starting MSRP:

As you can see, none of these electric vehicles substantially differentiate themselves from the pack with great range. The high is the Soul EV at 93 miles, although it uses the largest battery pack. The Mercedes B-Class ED can be charged past the default threshold for a “range extended” mode that can boost range an additional 17 miles to 104 miles total, but this feature should be used sparingly. The Focus Electric with its shiny new price cut brings up the rear at 76 miles, and the remaining four competitors range from 81 to 84 miles.

Volkswagen e-Golf fits right in the middle pack, and that’s really all that should have been expected of a converted legacy vehicle with the same size battery pack as the competition. It only comes in the top-trim SEL package and comes with standard fast charging, which somewhat justifies the relatively high sticker price. Good cargo space (the same as the gas-powered Golf, in fact) and Golf-like driving experience are also positives, with one potential drawback being the air-cooled battery.

We are less worried about that engineering decision than some, however – one would think VW learned from Nissan’s mistakes and is confident its cooling system is robust enough to withstand even summers in Phoenix.

Ryan wrote on November 10, 2014 - 2:37pm Permalink
I'm curious: what's your source for the claim that the e-Golf will be available in "the rest of the country in 2015"? I've seen no such statement from VW and my rest-of-the-county dealer says they haven't been told anything about e-Golf availability.
Luke Ottaway wrote on November 10, 2014 - 3:32pm Permalink
Upon closer review, it is something of a mystery. The LA Times claims VW has said the list of states will expand beyond the "CARB eight" later in the car's life span, which is very vague. It may be a while.