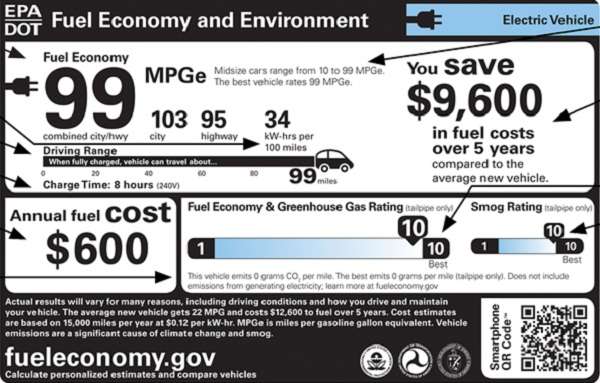 Should the EPA change the way it rates electric range?

Earlier this week we looked at how the Environmental Protection Agency tests battery electric vehicles to determine the electric range that gets reported on the window sticker. But why is there just one number?
Advertisement

It is common knowledge by now that conventional vehicles are rated by the EPA for fuel economy in both city and highway driving. The accuracy of the numbers is debatable (and judging by car commercials, you wouldn’t know that anything other than the highway number exists) but the ratings at least give a fair impression of how efficiently the car uses gasoline in various driving conditions.

Electric vehicles are similarly rated for efficiency in both city and highway driving, the difference being that the numbers are reported in MPGe. This miles-per-gallon-equivalent figure is calculated using the energy content of a standard gallon of gasoline (33.7 kWh) to report the electricity equivalent of miles per gallon and provide a quick way to directly compare electric vehicles to their gasoline counterparts.

Notably absent from the window stickers of electric vehicles is a range rating for both city and highway driving. Instead, a single number is presented to indicate combined driving range. (See how the EPA calculates the number here).

At best this number gives an incomplete understanding of the vehicle’s capabilities, and at worst it is downright misleading.

Just like most conventional vehicles, electric vehicles do not operate with the same efficiency in all driving conditions. But while gasoline cars get better mileage on the highway than in the city, electric cars are the opposite; most EVs are more efficient in city driving thanks to regenerative braking and the efficiency maps of electric drives.

For example, a Nissan LEAF achieves 126 MPGe in city driving and 101 MPGe on the highway. The ultra-efficient BMW i3 boasts an impressive 138 and 111 MPGe, respectively. The heavy yet aerodynamic Tesla Model S is more optimized for high-speed driving, and thus bucks the trend with 88 MPGe city and 90 MPGe highway.

Rob French of the EPA’s National Vehicle and Fuel Emissions Laboratory explained to us at Torque News why the label doesn’t specify a range for city and highway driving.

“The window sticker was developed through a comprehensive rulemaking with opportunities for public input, including significant efforts by EPA to assess public opinion through market research and focus groups of potential new vehicle buyers,” wrote French in an email. “[There are] necessary tradeoffs between information overload and making [the label] easily readable in the minutes or even seconds that consumers dedicate to viewing the label.”

What this amounts to is that the consumers surveyed by the EPA in general didn’t feel strongly enough about reporting both city and highway range to make it worth further complicating the label that already includes information like MPGe values, estimated fuel costs, greenhouse gas and smog ratings, and various fine print.

This prioritizing likely stems from a familiarity with city and highway fuel economy values of conventional vehicles, which are both reported on the label of electric vehicles as MPGe city and MPGe highway but aren’t necessarily as useful to the potential buyer as city and highway range ratings would be.

“The label is intended to provide common metrics for comparing vehicles, and simply can’t ever ‘tell the whole story’ with regard to the impact of driving styles and driving conditions,” French explained further. “We determined through the notice-and-comment rulemaking process that a combined city/highway driving range could achieve that goal without unduly complicating the label.”

Why it matters, and where to look

The lack of multiple range ratings is especially significant for electric vehicles like the Nissan LEAF and BMW i3, with efficiency that varies widely between city and highway driving.

An owner of a LEAF or i3 will discover it soon enough, but as a prospective buyer he may be unaware that the vehicle will not travel nearly as far when driven at higher speeds. Conversely, he may not realize just how great the car’s effective range is in urban conditions. This is critical information for consumers who must consider their commute and driving patterns when comparing vehicles.

To cite the most prominent examples: a prospective buyer of a LEAF will only see the 84 miles of range on the label. But this estimate can swing from 74 miles in what the EPA considers to be highway conditions (even lower at the speeds many Americans drive on the interstate) to 92 miles in standard city driving.

Similarly, the i3’s indicated 81 miles of range would vary from 72 highway miles to 89 city miles using the EPA-rated figures as a guide. Model S numbers would not change as dramatically, but the 265 miles of the 85-kWh version could be more accurately expressed as 263 city miles or 267 highway miles.

For their part, the EPA will tell you that the window sticker is for comparing vehicles against one another, not against some idea of what range should be. Obviously, the range will depend heavily on driving style, climate/accessory loads, terrain, etc. However, the average car buyer (not to mention the media) considers that electric range number to be one of the most important characteristics of the vehicle.

On the whole, full reporting of city and highway range figures could be either beneficial or detrimental to electric vehicles depending on the car in question and the needs of the buyer. The numbers still wouldn’t be perfect, as the EPA’s ratings tend to be approximations at best. But it would be more transparent and give shoppers a far more complete understanding of the vehicle’s capabilities, strengths and weaknesses.

Allan deLaubenfels wrote on August 21, 2014 - 3:33pm Permalink
It is absolutely true that driving style and distance make a large difference in economy ratings as does the change in seasons where it gets cold for EVs and PHEVs. But its eels to me that there is another actor which affects this discussion. That is the declining regard for better economy. One, 40 mpg was considered astronomic. Now when I report that I am getting 150 mpg (true) with my Prius PHEV I often get what appears to be a "ho hum" response. If it seems impossible, then it is something work for. If somebody actually does it, "so what". The significant point is that EVs and PHEVs save a ton of money on gasoline. So much so that they are effectively free to drive. Calculating that and especially predicting how to calculate that is hard.