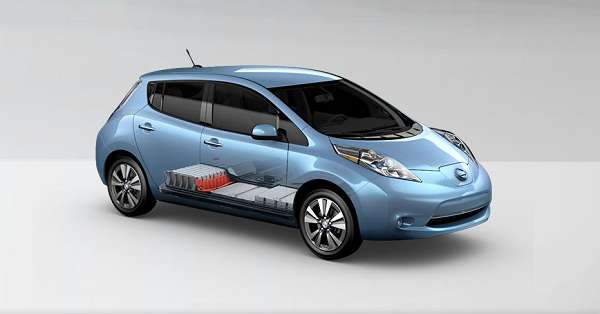 A big unknown when it comes to resale value of electric vehicles is battery degradation and the cost of replacing the battery pack. Nissan has addressed this concern with aggressive pricing of Nissan LEAF replacement batteries.
Advertisement

The crucial piece of information: any Nissan LEAF owner may now purchase a brand new 24-kWh battery pack for a suggested retail price of just $5,499 plus installation fees and tax.

In addition the owner will be required to trade in the old battery, which Nissan is valuing at $1,000 but does not count toward the cost of the new battery. The replacement packs are now available for purchase at any certified Nissan dealer.

Owners of the 2011 and 2012 model year LEAF will also have to purchase a $225 kit that includes brackets and related hardware to install the new battery. Installation time is estimated to be three hours, although no projected installation cost was given.

Nissan also revised its heavily critiqued monthly payment plan for a new battery so that owners may finance the replacement for around $100 per month over five years if they so desire and would own the battery at the end of the finance terms. More details on the financing program will be made available as they are finalized.

The replacement batteries will be the same packs as those in the 2015 LEAF, which feature a modified cell chemistry for improved durability in hot climates. The new heat-tolerant chemistry should alleviate worries about excessive capacity loss such as that experienced by some owners in the southwest United States, but it does not improve range or charging characteristics over the previous version.

How much is Nissan subsidizing the cost?

Some quick math reveals that Nissan valuing the new 24-kWh packs at $6,500 ($5,500 plus $1,000 for the old pack) theoretically indicates a cost of around $270/kWh for the new battery. This suggests that the increase in volume production of large-format lithium ion cells has driven the cost down significantly, although Nissan is most likely going to lose money on the few replacement batteries sold for the first year or two as it lowers costs further.

A spent LEAF battery is worth more than $1,000 for applications like residential solar energy storage, but most of the old batteries initially will be recycled. Some will be reused as part of Nissan’s 4R Energy operation, though it will be interesting to see what Nissan ultimately does with used packs once they begin coming offline in droves.

Why it is so important

Batteries are without question the weak link of electric vehicles. They are the limiting variable in the longevity of the vehicle; though critical EV components like the drive motor and brakes will last far longer than their counterparts in gasoline vehicles, the battery pack limits the effective life of the car as the rest is useless without adequate battery life to power it.

Nissan knows this – they only warranty their battery packs against capacity loss for 5 years and 60,000 miles (8 years and 100,000 miles against defects), although they may adjust those numbers if the new heat-tolerant chemistry proves more successful. They also know that the used LEAF market will struggle without a competitive battery replacement program; nobody is going to pay very much for a vehicle that comes with a timer counting down to the end of its useful life.

With used conventional vehicles, there is at least the hope that nothing will break down if it is maintained well. If components break, they can often be repaired or replaced at relatively low cost.

With used electric vehicles, the battery will degrade to unusable capacity and there is virtually nothing that you can do about it, short of delaying the inevitable with careful charging and driving patterns. Thus the concern about replacement battery costs; overly expensive replacement batteries would greatly hurt the resale value of the vehicle.

The obvious flip side of this concern is that if the battery can be replaced at reasonable cost, an electric vehicle gets a new lease on life and a huge boost in resale value. That’s why the aggressive pricing set by Nissan is encouraging – considering that a brand new battery could legitimately double the life of a LEAF, $5,500 is a very fair price to pay.

Though Nissan refused to offer any details on future higher-capacity battery packs, we are free to speculate. It is widely expected that the next-generation LEAF, likely to debut as a 2017 model year, will come with the option of a larger battery for more range. Specifically, current LEAF owners were asked in a detailed survey how much extra they would be willing to pay for 150 miles of range instead of 85.

The upgrade will be mostly from improved battery chemistry with greater energy density than the current generation. We could see a pack with capacity as large as 42 kWh, which would put the LEAF in the ballpark of 150 miles of range.

If the future larger battery packs are not the same in size and shape as the 2015 battery, owners wishing to upgrade their current LEAF to a 150-mile version will be disappointed. Nissan no doubt is aware of this, so we will see if their engineers can figure out how to package a significantly greater capacity in the same space even with a large energy density increase.

Utilizing more of the available capacity could be another route, or offering the option of an occasional maximum charge like the Mercedes Benz B-Class ED would be an easy way to “achieve” 150 miles of range.

Given Nissan’s recommended retail price of $270/kWh for the 2015 battery pack, this number suggests that increasing range from 85 miles to 150 miles would cost something like $5,000. We will see how close that value is to reality, but early indications are that a longer-range LEAF won’t break the bank.

The most important thing to come out of Nissan’s replacement battery announcement is that LEAFs are no longer restricted to a mere 8 years on the road. Without noticeable aging in the drivetrain, a used LEAF upgraded with a new heat-tolerant battery will feel just like a brand-new car again. With no transmission, combustion engine, or exhaust system, electric vehicles can last far longer than conventional vehicles if the issue of battery life is eliminated.

Nissan has done its part to maximize the service life of its LEAF vehicles. The used market will flourish, and owners who really love their LEAF may now effectively double its useful life for just over $6,000 after taxes and installation fees. This will certainly change the way people think about leasing or financing the LEAF and does wonders for the confidence of existing and potential owners.