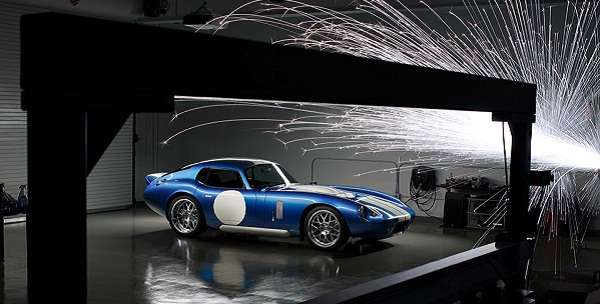 The newest electric supercar on the block revisits an American classic

Though most of us will never attain the level of wealth required to own one, the list of hybrid and pure electric supercars is growing. The latest comes from Silicon Valley and may look familiar.
Advertisement

The original Shelby Daytona, known for winning the legendary Le Mans race in 1964, is sleek and easily recognizable. A few attendees of the 2014 Pebble Beach Concours d’Elegance may have done a double take upon seeing Silicon Valley’s latest electric vehicle creation.

Renovo Motors, based in Campbell, California, came out of the shadows recently to show off its prototype Renovo Coupe at the Concours d’Elegance. The vehicle is an all-electric revision of the original Shelby Daytona; though the powertrain is completely new, the Shelby American brand is supplying the CSX9000 chassis and exterior for the Renovo Coupe and the exterior looks strikingly similar to its predecessor. Peter Brock, the very same designer of the 1964 model, worked closely with Renovo in the development of this new supercar.

We’ll start with the biggest one: $529,000. That is how much the Renovo Coupe will set you back when it becomes available in the second half of 2015, and not many will be built – a ‘fraction’ of the 375-unit volume of the McLaren P1, according to Renovo.

The performance specs, though, are appropriately impressive. Two axial flux electric motors, sharing a common shaft that drives the rear wheels, put out 500 horsepower and over 1,000 lb-ft of torque, rocketing the 3,250 pound beauty to 60 mph in just 3.4 seconds.

The battery is made up of three separate packs, two in the front and one in the rear. Renovo (via Jalopnik) claims a range of just 100 miles from 30 kWh of capacity, though fast charging capability will enable the car to be juiced up in as little as 30 minutes to maximize track time.

An American classic with the ideal propulsion system

“This shape was nearly perfect 50 years ago, and physics doesn’t change much over time,” said designer Peter Brock. “However, the redesigned car has a totally updated body, frame, suspension, and cabin; it’s a new chapter for this chassis. The finished product definitely carries the spirit of the original car strongly into the future.”

The major upgrade to what was an iconic car is to the powertrain. “Our motivation to design and build our cars is not artificially tied to any particular propulsion technology,” said Jason Stinson, Renovo Motors CTO. “Simply put, we can do things with electric vehicles that can’t be replicated by any other platform.”

As we are seeing more and more, automakers both mainstream and boutique are discovering that the performance of high-powered electric motors is unmatched and offer a great many possibilities. No doubt this vehicle will be a blast at the track.

Though many promises of electric supercars never come to fruition, Renovo has been working on this car sans hype for the past four years and was offering drives at Pebble Beach to prove their car is not just for show. They may not meet their ambitious delivery timeline, but the few lucky buyers of the Renovo Coupe probably won’t mind waiting.