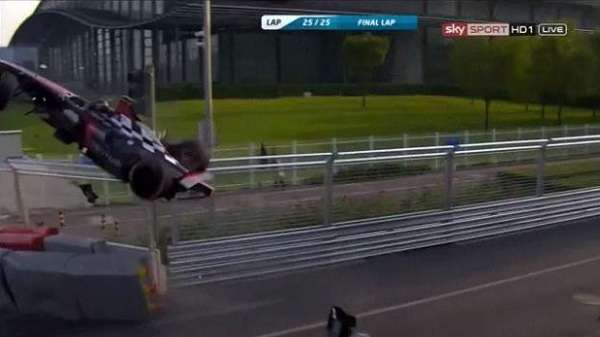 The first-ever Formula E race in Beijing on Saturday provided its share of excitement, particularly on the final lap that featured a scary crash.
Advertisement

After many months of buildup, the Formula E electric racing series finally got the green flag outside the Bird’s Nest in Beijing on Saturday. Here’s how the first of the 10-race series went down:

SPOILER ALERT: If you missed the race live but really care about which driver won, stop reading – Fox Sports 1 will be airing a replay of the race on Sunday, September 14 at 1 PM eastern time.

Entering the last lap of the 25-lap, 69-mile race, Nick Heidfeld of Venturi was trailing Frenchman Nicolas Prost of e.dams Renault. Approaching the final turn, Heidfeld made an aggressive move to pass to the inside and Prost belatedly swerved to block the move.

The cars collided, sending Heidfeld’s car careening into a curb and airborne where it smashed into a barrier and broke into pieces. Watch the video of the spectacular wreck here – despite the severity of the crash, Heidfeld was unhurt but was not happy.

Heidfeld briefly confronted Prost after the incident, but after the race told reporters that “It is disappointing, but I’m not mad at him. This is racing.”

Prost denies he was at fault: “I would not have expected for him to have attempted a suicide move at the end of the race,” he told the Telegraph. My victory is stolen. It is really hard.”

Judge for yourself, but it is hard to find fault with Heidfeld’s maneuver.

With the two leaders out of the picture, Brazilian Lucas de Grassi of Audi Sport ABT was first to the finish line with a winning time of 52 minutes, 23.4 seconds. His average speed for the race was 79 mph with a best lap of 93 mph. (Full results here).

The next Formula E race will be in Putrajaya, Malaysia on November 22. The circuit of races featuring all-electric Formula cars screaming around city streets hits the United States on March 14 in Miami and April 4 in Long Beach.

If you saw the inaugural race in Beijing, what did you think? Let us know in the comments below.