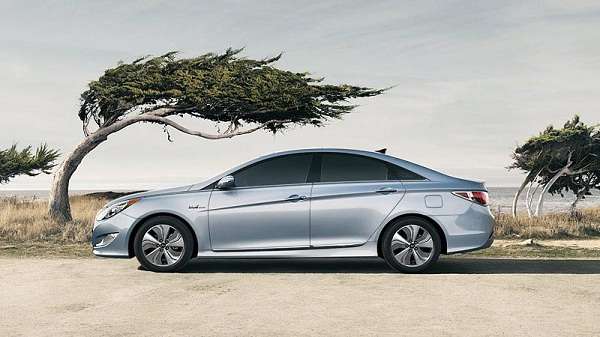 Hyundai Sonata, Kia Optima to be electrified in 2015 at a reasonable price

And so the trend of plug-in hybrid conversions of existing models continues. Even Hyundai/Kia is in on the game now, with a recent announcement of an electrified Sonata and Optima coming next year. The most important part may be the sticker price.
Advertisement

Yang Woong-Chul, Vice Chairman of R&D at Hyundai, confirmed the news earlier this month at the 2014 R&D Idea Festival (Korean Car Blog via Inside EVs).

“We will roll out a plug-in hybrid model of Sonata and K5 [Optima] next year. Since we will use locally made engines, inverters, and batteries, we expect them to have strong price competitiveness,” he said.

How much range to expect, and at what price?

The two most important aspects of any plug-in hybrid conversion of a conventional model are all-electric range and sticker price.

With the exception of the Chevrolet Volt, which has no gasoline counterpart and manages 40 miles of range on battery alone (and is properly labeled a range-extended electric vehicle rather than a plug-in hybrid), most plug-in hybrids on the market today and on the horizon are anticipated to offer 25 miles of electric range or less on the EPA cycle.

Expect no different from the Sonata/Optima plug-in models, which will compete with the likes of the Ford Fusion Energi that “boasts” 19 miles of electric range and to a lesser extent the Toyota Prius Plug-In, which only manages 11 miles. A reasonable estimate for the Korean plug-ins is 20-25 miles, especially given the apparent concern with lowering costs.

It is notable that Woong-Chul made a point of stating the expectation of “strong price competitiveness.” Since even the cheapest batteries and power electronics will cause any plug-in model to command a significant price premium over its conventional sibling, it is likely that the R&D vice chairman was referring to price competitiveness with other plug-in hybrids.

We will assume that locally made batteries refers to either SK Innovation, the supplier for the Soul EV, or LG Chem, which has established itself as a major player and industry leader in the electric vehicle sector. Sourcing cells from either, but particularly LG Chem, should keep costs under control – combined with the aforementioned locally sourced engines and inverters, it would not be surprising to see the Sonata/Optima plug-ins start below $33,000.

A soon-to-be-retired Hyundai Sonata or Kia Optima Hybrid commands an MSRP of $26,000, while a Ford Fusion Energi starts at $34,700 (a standard Fusion Hybrid costs $26,475). Upgrading the conventional hybrids to plug-in models would require a larger motor and inverter, an on-board charger, and most likely an additional 7-8 kWh of battery capacity. Given Hyundai/Kia’s emphasis on price competitiveness, we believe they will be able to undercut the current Fusion Energi MSRP.

Learn to walk before you can run

The 2015 Kia Soul EV, though a very competitive offering among all-electric vehicles that Kia seems committed to supporting, will only initially sell in volumes of about 5,000 per year. Similarly, don’t expect groundbreaking sales numbers from the plug-in Sonata and Optima when they arrive.

Though merely producing a limited-range plug-in hybrid version of an existing model (as several notable automakers have done) is far from a true commitment to electrification, it should be viewed as a step in the right direction.

The more plug-in models are available and on our roads, the closer we come to the so-called “tipping point” of electric vehicle adoption, where prices dip below a critical threshold and consumers no longer regard plug-in cars or public charging stations as unusual. Hyundai/Kia is late to the game, but better late than never.

mike w wrote on October 22, 2014 - 6:32pm Permalink
25 to 40 mile electric range would work for most of my driving needs. would consider and cross shop the 2016 Volt when they come out.
Joshua Burstyn wrote on October 27, 2014 - 3:59pm Permalink
Having tested the Volt I believe the Sonata will feel more substantial and have higher interior quality. Might be worth a look. :-)