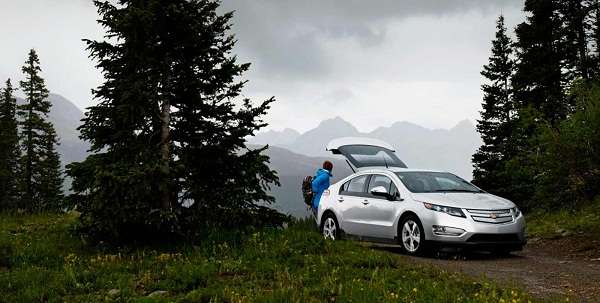 Today GM officially announced it will invest $449 million to support the launch of the next-generation Chevrolet Volt and two upcoming unspecified models. The investment reaffirms GM’s commitment to the Volt and raises speculation about the mystery cars.
Advertisement

“These investments will help the next-generation Chevrolet Volt build on its position as the leader in electrified propulsion.”

Information from various sources on Sunday had indicated that GM would also add 1,400 jobs at the two facilities. The Detroit-Hamtramck plant currently employs 1,600 people on a single shift while Brownstown employs only 100 workers. The obvious conclusion from Sunday’s report is that GM will add a second shift, effectively doubling the production capacity of the facility. However, today the company said only that they hope to add a second shift if demand for the vehicles is strong.

While $384 million of the $449 million investment will be dedicated to tooling, equipment, and plant upgrades for the Hamtramck facility, the remaining $65 million is going toward “the next generation of lithium-ion battery production and future battery systems” that will power future Volts and most likely other electric models.

The next-generation Volt has been the subject of heavy speculation; what we know is that it will begin production in late 2015 and debut as a 2016 model year vehicle. Indications from GM are that it will be cheaper than the current model and will likely feature a modest increase in all-electric range, as a significant increase would negate any cost gains.

The $65 million earmarked for battery technologies points to further development of GM’s electric vehicle lineup. It is possible that GM has been working on battery packs of different sizes behind closed doors and will introduce a choice of battery pack with the 2016 Volt.

This concept would make a great deal of sense; last year GM appointed a team to study Tesla, which provides the option of a 60-kWh or 85-kWh battery pack with its Model S. Rather than choose between lowering purchase price or increasing electric range for the 2016 model, GM could be preparing to offer this choice to buyers of the next-generation Volt by providing the option of a smaller or larger battery pack.

A similar theory, proposed by LMC Automotive analyst Jeff Schuster, is that GM will offer what would amount to a compact version of the Volt under a different nameplate with a smaller battery and less all-electric range. This type of vehicle would be less expensive than the Volt and thus would be able to reach more customers.

Optimistic industry observers have also run wild with the idea of a 200-mile all-electric vehicle emerging from GM stables around the same time as the 2017 introduction of Tesla’s mass-market sedan. With today’s announcement hinting at two future models almost certain to be electric, a new wave of conjecture is about to begin.

What would you like to see GM come out with? Let us know in the comments.

Panasonic Updates Profit Forecast, Noting How Much Tesla Batteries Help The Jump
2022 Porsche 911 GT3 Laps Nurburgring in 7:04 With Journalist Behind The Wheel
END_OF_DOCUMENT_TOKEN_TO_BE_REPLACED