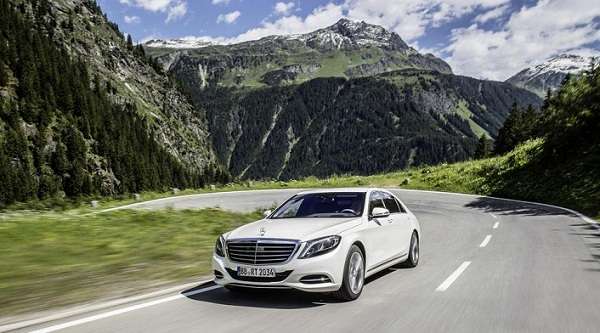 Sure, it is the approximate size of a small yacht and will cost about the same. But the new Mercedes S550 plug-in hybrid represents just the first in what is promised to be a long line of electrified vehicles bearing the distinctive three-point star.
Advertisement

On Monday, Mercedes-Benz officially introduced the 2016 S550 PLUG-IN HYBRID (all caps intentional) while confirming that the F1-inspired powertrain architecture of the newly electrified executive sedan will find its way into 10 plug-in hybrid models within the next three years.

A luxury plug-in hybrid to rule them all

The Mercedes S-Class is known for its quiet, opulent interior and its smooth, effortlessly powerful ride. It is the ultimate executive sedan, and is priced accordingly. (If you have to ask...)

Starting in spring 2015, the S-Class will come with a plug-in hybrid version that promises to offer all the benefits of the legacy S-Class but with drastically improved fuel economy and emissions. “The S550 PLUG-IN HYBRID is the first luxury sedan with the performance of a V8 and the fuel consumption of a compact model,” claims Dr. Thomas Weber, chief of R&D at Mercedes.

The plug-in S550 claims 20 miles of all-electric range from the 8.7-kWh battery pack (6.4 usable kWh), though the EPA will likely hammer that down to 15-18 miles in the official ratings.

It will be capable of reaching 87 mph on electric power alone, and will have four driver-selectable operating modes: E, the default electric-to-hybrid; E+, for enhanced efficiency and slightly lower performance; E-Save, to conserve the battery for later; and Sport, which pulls up the engine and uses the electric motor for extra power.

Power will come from a mere 3.0L V6, twin-turbocharged to produce 329 hp and 354 lb-ft of torque. The electric motor, sandwiched between the engine and 7-speed automatic transmission, is capable of 114 hp and 251 lb-ft of torque from a dead stop. Combined system output will be 436 hp and 479 lb-ft, enough to move the massive sedan from 0-60 in 5.2 seconds.

Mercedes plans to introduce all these plug-ins primarily to meet fuel economy regulations and appease a growing environmentally-aware segment of its customer base. It is able to do so at minimal cost in both dollars and development time by utilizing the same powertrain architecture, the Mercedes-Benz parallel hybrid modular system, for all of its rear- or all-wheel-drive models. The automaker can simply swap out the engine as needed, and electric motors with different outputs may be accommodated as necessary.

So enjoy gawking at the S550 plug-in as it silently glides by, but if you’re holding out for an electric model from Mercedes you can actually afford you won’t have to wait long. By 2017, there will be plenty of plug-in hybrid options from the premium German automaker.