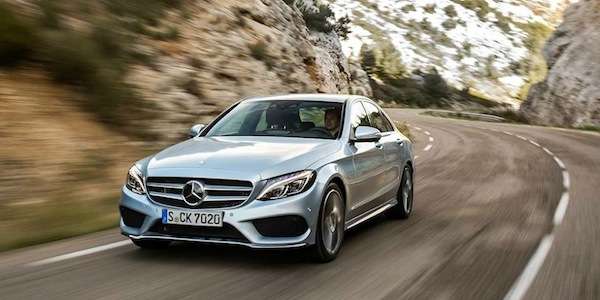 Is a new fuel-stingy 2015 Mercedes C-Class Plug-in Hybrid on the horizon?

The 2015 Mercedes-Benz C-Class is about to make its dealer launch here in the U.S. Is a C-Class Hybrid coming?
Advertisement

Mercedes-Benz will be launching the all-new 2015 C-Class soon and reports say a new plug-in hybrid is coming. A report by AutoCar says that Mercedes is gearing up to bring more hybrids to the market and the new C-Class will be getting a new hybrid drivetrain. Mercedes just introduced the B-Class Electric Drive, but the report says the German automaker will pour more resources into producing plug-in hybrid technology for its larger cars in their lineup.

Mercedes will use new MRA technology

Thomas Weber who is Mercedes-Benz head of development, said at the launch of the new 2015 C-Class Estate last month that they will use the new Mercedes Rear-wheel Architecture (MRA) which is designed to use PHEV technology.

Weber told AutoCar, “We believe that for C-class upwards, the only way to go as we near 2020 and beyond is plug-in hybrid electric vehicles. We will have a plug-in S-class in September, and later in the life cycle of the C-class we will have one too. MRA will make it possible for us to go for plug-in hybrids across the range.”

C-Class is a top seller

Mercedes sells more C-Class models than any other model here in the U.S. and it will be important for them to reduce its fleet average CO2 emissions. Sources have indicated that the C-Class plug-in hybrid will be powered by a turbocharged 2.0-liter four-cylinder gasoline engine rated at 211 horsepower and a 68-horsepower electric motor linked to a lithium-ion battery pack. The two power sources send power to the rear wheels via an automatic transmission.

The new 2015 Mercedes C-Class rolls out here in the U.S. in September and its the first sedan that Mercedes will produce here in the U.S. The C-Class is a high-volume model for Mercedes, constituting over one-fifth of the company’s U.S. June sales. The new C-Class will be produced at the company’s North America plant in Tuscaloosa, Alabama which presently makes the SUVs M, R and GL-Class.

C-Class is being produced in four continents

The C-Class will be the first Mercedes-Benz model to be produced in four continents, reflecting the high demand for the C-Class worldwide. The new 2015 model is already being manufactured in Germany and South Africa, and will begin production in the U.S. and China this year. It's a global car and will be ideal for the new hybrid technology.

Mercedes-Benz will be launching the all-new 2015 C-Class soon here in the U.S. and it looks like a new plug-in hybrid C is coming. Mercedes is gearing up to bring more hybrids to the market and the new 2015 Mercedes-Benz C-Class will be a prime vehicle for Mercedes to offer their new PHEV Rear-wheel Architecture.

Other 2015 Mercedes-Benz C-Class stories of interest.
The global 2015 Mercedes C-Class will stay the volume leader