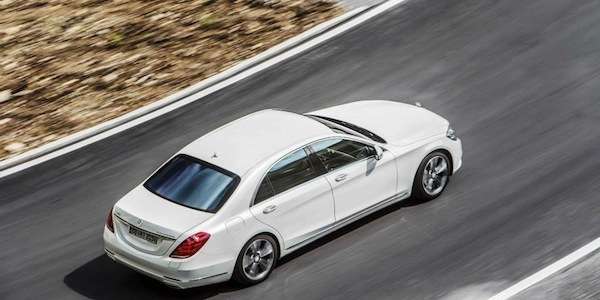 The all-new 2015 Mercedes-Benz S550 is the first Plug-in hybrid from the German automaker. How is it related to F1 racing?
Advertisement

Mercedes-Benz introduces the first Plug-in hybrid with a star and it comes with technology developed on the race track. Mercedes has one of the most successful Formula One race teams on the planet and they use the knowledge gained from racing and put it into their production vehicles. The all-new 2015 Mercedes-Benz S550 Plug-in hybrid is a result of this F1 technology. How about a Bi-turbo and an electric motor for a combined output of 436hp?

Mercedes-AMG transfers the technology to the production cars

When we watch motorsports, sometimes we forget about why automakers are doing it. We think racing is just about standing on the podium spraying Champaign as a winner. Mercedes-Benz races F1 cars to win, but much of what happens on the track gets transferred to cars we drive everyday. Even if you aren’t into motorsports, what happens on the track is vitally important to the technology that goes into improving the everyday car. Mercedes-AMG is not just there to win, but to improve the technology that goes into the Mercedes-Benz in the garage.

The performance of a V8

The Mercedes-Benz S550 Plug-in hybrid offers performance of a V8 and the fuel consumption of a compact model. The new plug-in hybrid luxury sedan comes with a V6 biturbo and the intelligent hybrid drive system. It offers a total output of 436 hp and 479 lb-ft torque and sprints from 0 to 62 mph in just 5.2 seconds. That’s performance you would expect from a sports car. And Mercedes says the S550 Plug-in hybrid can be driven up to 20 miles on purely electric power.

Mercedes achieves this impressive output with the F1-developed V6 biturbo and the intelligent hybrid drive system. It comes with a high-voltage lithium-ion battery with an energy content of 8.7 kWh that can be externally recharged via the charging socket in the right side of the rear bumper of the luxury saloon.

Prof. Dr. Thomas Weber is responsible for the development of the new S550 Plug-in hybrid and talks about the challenges in developing this king of technology. He says, “The greatest challenge in this is to translate efficiency into superior performance. In this respect there is a highly interesting parallel with our successful Formula 1 racing car, which likewise has a turbocharged V6 engine and a high-tech hybrid drive.”

Mercedes uses a hybrid transmission that’s based on the 7-speed automatic transmission. The plug-in-hybrid system in the S-Class is based on the Mercedes-Benz parallel hybrid modular system. The common system-specific feature is the additional clutch integrated between combustion engine and electric motor. It decouples the combustion engine during purely electric operation. And if the combustion engine is employed, it moves off drawing on the performance of a wet start-up clutch. The clutch then substitutes for the torque converter and requires no additional space owing to its complete integration in the torque converter housing.

Hybrid driving is easy with the new luxury sedan. Mercedes uses a special haptic accelerator pedal that provides a unique acceleration of the electric motor. The new plug-in hybrid moves just as easily as any other automatic transmission car when the driver needs to drive off. But it provides efficiency via kickdown of the special acceleration of the electric motor. The intelligent operating system automatically selects the ideal combination of internal combustion engine and electric motor. It is able to adapt its strategy according to the charge status of the battery and also adjusts it according to the traffic or route.

This haptic accelerator pedal can signal via a double impulse when drivers should take their foot off the accelerator for sailing and recuperating. During electric operation it can supply the driver with feedback on the switch-on point of the combustion engine. The energy flow can be shown in all operating states in the instrument cluster and in the central display if this is selected by the driver.

The new 2015 Mercedes-Benz S550 Plug-in hybrid is the first hybrid model in the U.S. for the new S-Class. It uses technology that came directly from the knowledge gained from the AMG Formula One teams and the performance to go with it. Mercedes did not release pricing or exact launch dates for the new luxury Plug-in hybrid S-Class. Look for more plug-in hybrid models to come from Mercedes in the near future. This testing has been going on at Mercedes since 2009, and the German automaker says in the years to come the main emphasis will be on plug-in hybrids.