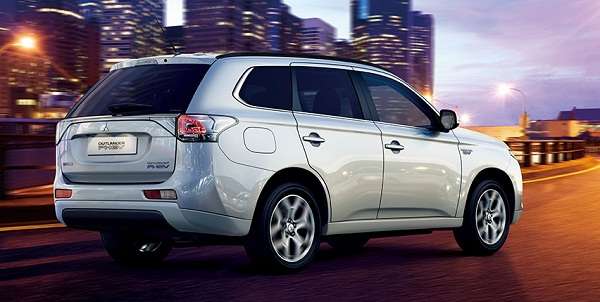 Despite roadblocks, Mitsubishi Outlander Plug-In Hybrid will arrive in US in fall 2015

The plug-in sport utility vehicle that has sold well in Europe and Japan is at last on its way to the United States, and will arrive sooner than some recent reports feared.
Advertisement

With the exception of the low-volume Toyota RAV4 EV, every plug-in vehicle currently on the market is a sedan or hatchback. Among those offerings, only the Tesla Model S and Porsche Panamera plug-in version can be described as large vehicles. The upcoming Mitsubishi Outlander Plug-In Hybrid will help change that starting in the fall of next year.

The U.S. launch of the Outlander PHEV has been pushed back repeatedly, most recently due to a bottleneck in battery production and California’s demand that the vehicle be equipped with a system to monitor battery degradation that would affect emissions. Now, though, Green Car Reports says that the vehicle will indeed be available in the United States in fall 2015 according to an anonymous source.

The Mitsubishi Outlander PHEV will come equipped with a 12 kWh battery and a pair of 60 kW electric motors, one each in the front and rear to support the 2.0L four-cylinder engine. It possesses no conventional transmission, but rather sends the engine power through a fixed gear ratio for efficient highway cruising. In other driving scenarios it either operates as an EV or as a series EV with the engine acting as a generator to charge the battery. It will likely achieve 25-30 miles of range in all-electric mode.

The Outlander Plug-In Hybrid will compete with the BMW X5 eDrive and the Volvo XC90 plug-in hybrid, all currently expected to arrive within a few months of each other.

It will be interesting to see what kind of sales this new plug-in hybrid segment will achieve. The Outlander Plug-In sold 19,700 units globally in the fiscal year that concluded on March 31 and anticipates 48,000 sales in the current fiscal year. Equally as impressive, the current generation of the Outlander had sold 35,000 plug-in versions out of 165,000 total units worldwide through March.

The X-factor in the success of these electrified SUVs could be the American love affair with their sport utility (excuse me: crossover utility) vehicles. As we discussed in contemplating the potential of the Tesla Model X, the fact that more than half of all American cars sold are classified as light-duty trucks means that finally entering this market opens the door to many more sales for electric vehicles.

Still, the 2016 Outlander Plug-In Hybrid will command a significant price premium over its conventional sibling that ranges from $23,820 to $28,600 before options. The current plug-in version sells for the equivalent of $55,000 in the U.K. at current exchange rates, though AutoTrader.com estimates the U.S. import will be in the $40,000 range. How will American consumers respond to this highly efficient SUV? We will still have to wait a while to find out.