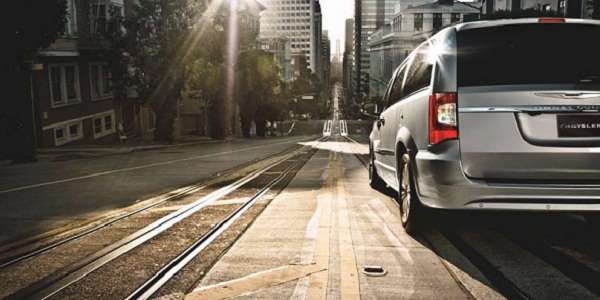 Chrysler will add two large plug-in models by 2017, but not because it wants to

Not exactly known for electric vehicles, Chrysler plans to produce not one but two plug-in hybrids as part of their five-year plan revealed yesterday. It is a move driven primarily by regulations.
Advertisement

The only model that Fiat-Chrysler currently offers with an electrified powertrain is the low-volume Fiat 500e compliance car that the automaker clearly builds with reluctance. However, rising fuel efficiency standards will force even the most staunchly conventional automaker to eventually add an electrified model or two to compensate for the relative gas guzzlers that comprise the bulk of their vehicle sales.

The company’s five-year plan released on Tuesday revealed future plans for two large plug-in hybrid electric models, a minivan and a large crossover utility vehicle. The minivan will be a variant of the Town & Country and will arrive in 2016 while the full-sized CUV will be a new model offered with a plug-in option likely starting in 2017.

According to Chrysler president and CEO Al Gardner, the electrified minivan will achieve 75 MPG. This probably refers to the target MPGe rating for all-electric mode, which for a minivan would compare favorably with existing electric vehicles. Based on Chrysler’s previous iteration of plug-in hybrid development, anticipate all-electric range to be about 40 miles.

It is heartening to see Chrysler jump into the electric vehicle segment, especially with two models that aren’t small cars. The law of diminishing returns states that the benefits of improving fuel efficiency decline with smaller vehicles, so the most benefit from electrification comes with the largest and thirstiest vehicles such as minivans, large SUVs, and pickup trucks.

However, it is still evident that Chrysler plans to produce these vehicles only because it has no choice. Chrysler global powertrain boss Bob Lee indicated that the purpose of the minivan is to comply with California zero-emission regulations, and expounded the view that “the [electric vehicle] market continues to be primarily driven by regulatory requirements” (The Detroit News). Lee also denounced the upcoming hydrogen vehicles from Honda, Hyundai, and Toyota as not commercially viable.

Without any hybridized models to speak of, without faith in electric vehicles or hydrogen technology, what exactly is Fiat-Chrysler’s vision of the future? Most automakers have thrown their lot in with one or more alternative propulsion technologies: Nissan and Tesla have committed to battery electrics; BMW has invested significantly in both battery electrics and plug-in hybrids; Ford, GM, and VW Group are focused on plug-in hybrids; Honda and Hyundai believe in fuel cells; and Toyota/Lexus has committed to hybrids and fuel cells.

Then there is Fiat-Chrysler, which has adopted what amounts in practice to a “none-of-the-above” alternative propulsion strategy. It is clear that the proposed plug-in models are needed to boost the automaker’s fleet average fuel economy to reduce the fines they will undoubtedly be receiving from the federal government, barring a miraculous change in philosophy during the quest for the 54.5 MPG target by 2025 that Chrysler and its parent company are unlikely to achieve.

Fiat-Chrysler reacts to market forces, and it appears to have decided that because the market for electric vehicles is presently limited and it loses money on each compliance EV it makes, this will continue to be so for the foreseeable future. Despite the regulation-inspired future plug-in models recently announced, it seems as though the automaker cannot see very far.

Leozinho wrote on May 23, 2014 - 3:51pm Permalink
The In-line 6 Cylinder engine from Jeep is what put them on the map for mnkaig reliable vehicles. The overall quality of parts, design, and construction is what will contribute to a long-lasting engine. Toyota has a great reputation for their cars giving you the biggest bang for your buck but that isn't a universal fact. Things like regular maintenance and prompt repair are what will really make an engine last. I have heard of both makes of vehicles having models that last into the 300,000 mi range but in those cases the vehicles were very well taken care of. No engine will ever make it more than 20,000 mi if they are completely neglected. I have a '96 Cherokee with the I6 engine and it has over 140,000 mi on it and it runs just as well as newer Jeep models with far less mileage. The V6 engine from Jeep is just as reliable as their legendary I6 ever was so from an investment standpoint it's as solid of one as you can get. The Jeep name carries with it a certain prestige that is undeniable. That, coupled with the longevity of their products make for one reputable brand. What it will ultimately come down to is brand loyalty and the features offered on each vehicle.