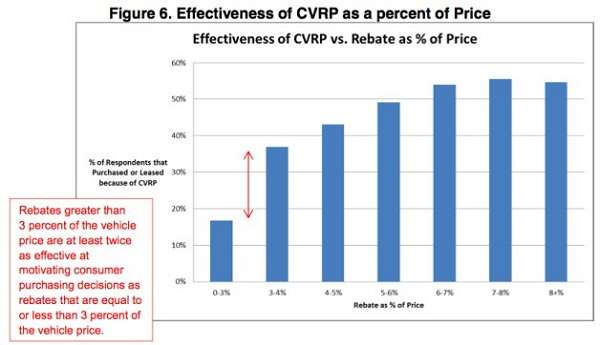 The California Air Resources Board had been toying with the idea of limiting state rebates to zero-emission vehicles with a price tag below $60,000. Now it appears that this proposal has been scrapped.
Advertisement

Back in April it was reported that the California Air Resources Board was $30 million in debt and desperately needed funding to continue its wildly popular Clean Vehicle Rebate Project (CVRP). At the time, the board was considering options to reduce its financial burden; one main option in a staff proposal was to reduce the rebate amount by $500 for all vehicles, so that the rebate would be $2,000 for battery electrics and $1,000 for plug-in hybrids. The other option ruffled Tesla’s feathers.

The proposal also suggested placing a cap on MSRP that would render vehicles above $60,000 ineligible for the rebate. The only two vehicles affected would have been the low-volume Cadillac ELR and the popular Tesla Model S. At the time, Torque News reported that the proposal was both logical and unfair; it makes sense to give rebate priority to less expensive cars where the rebate is a larger factor in the purchasing decision, but the proposal also would have essentially singled out Tesla, not to mention that offset carbon dioxide emissions don’t know the price of vehicles.

Fortunately, Silicon Beat reported this week that the unpopular idea to take away Model S state rebates has been scrapped. The current staff proposal states that “at this time staff is not proposing any significant changes to the Clean Vehicle Rebate Project as part of this year’s Initial Funding Plan.” This was partly made possible by the recent infusion of $25 million into the CVRP that buys the program a little more time.

When asked specifically about the $60,000 plan, CARB spokesman David Clegern said, “It’s fair to say it’s been removed. I never say anything is dead until after the vote, but I’m not aware of any plans to revisit it.”

This outcome is certainly good for Tesla, who happens to be the largest automotive employer in the state of California. The company employs over 6,000 people in the state and recently expanded to a facility in Lathrop to provide support for its Fremont factory. There is also the elephant in the room, the Gigafactory; though it is highly unlikely Tesla will surprise everyone by choosing California as the Gigafactory site, the option is still open as Tesla has yet to announce its decision.

It is for the best that this controversial proposal was shelved. CARB will face more funding problems in the future as demand for electric vehicles continues to climb, but hopefully they’ll come up with a solution that won’t alienate one of the most important automakers in the clean vehicle movement.

Aaron Turpen wrote on May 21, 2014 - 12:17pm Permalink
Ahh, yes, the rich man can keep his rebates too. Plus CARB, which is only $30M in debt, can say they "have more time" now that they're only $5M in debt. Yay, government logic!
Weapon wrote on May 21, 2014 - 12:21pm Permalink
The best solution would be to eliminate the subsidy for cars who have less than 35 miles electric range. Like all such things when it gets overfilled, you cut off from the bottom. An average person drives about 35 miles per day so a car that is riding on less than 35 miles is most likely riding on gasoline. If California's goal is to eliminate local tail pipe pollution in the state, it makes sense.