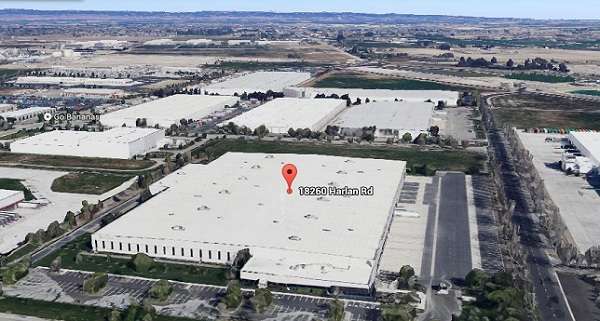 The Gigafactory has been headline news this year, but Tesla recently made an under-the-radar move to acquire and renovate an old Daimler-Chrysler distribution center for unspecified manufacturing purposes.
Advertisement

Tesla has quietly begun work on a 431,000 square foot facility it recently leased in Lathrop, California, just over 50 miles from its current Fremont plant. Formerly a parts distribution center for the auto alliance that used to be Daimler-Chrysler, the building has been dormant since 2009 and was never fully utilized.

Tesla’s current Fremont plant is 5.3 million square feet and Tesla is still only using a small portion of that area. At its peak the facility churned out over 330,000 vehicles per year, a number Tesla hopes to approach once production of its third-generation Model E begins humming.

The Manteca Bulletin reports that the newly acquired distribution facility could accommodate an expansion of 125,000 square feet if necessary. Tesla has taken out permits for “manufacturing modifications,” and according to Lathrop City Manager Steve Salvatore the company will use the facility for as-yet-unknown manufacturing purposes.

This move by Tesla could be related to the Gigafactory, as the proposed battery factory will require a great deal of preparation. Given that Tesla has already begun renovating the facility and has posted job openings for the site, it is unlikely that it was simply acquired to be stashed in the company’s back pocket until needed.

Judging from limited evidence, though, the Lathrop facility will most likely be for machining parts for Tesla vehicles; the jobs page on Tesla’s website lists 32 openings in Lathrop mainly for CNC and machining technicians, which implies the cutting and shaping of metal. Moving these operations an hour east to Lathrop would free up floor space at the Fremont assembly plant ahead of time to make room for expanded future production.

Further, in the job descriptions it is clearly indicated that the site will be a CNC machining factory. The timing of the move also indicates it could be related to the launch of Model X, currently scheduled for early 2015. Presumably the new facility will take some time to retrofit for Tesla’s needs and scale up production of whatever it may churn out.

Tesla has always wanted to control as much of its supply chain as possible; unlike larger automakers it makes almost everything in-house. This is likely a strategic move to either bring another element of the supply chain under direct Tesla control, or to offer support for Model S and Model X production while freeing up floor space at the Fremont factory.

Whatever the purpose, Tesla continues their trend of gobbling up inexpensive and unwanted real estate and clearly intends for this Lathrop facility to figure in their future plans.

Roy Crockett wrote on April 26, 2014 - 11:47pm Permalink
Basing my guess that Lathrop will supply parts for Model X is the fact that waiting list exceeds 13,000 advance cash deposit orders. Get this winged marvel in drivers hands ASAP to raise profit and market cap. Wall Street bobling heads will be in a frenzy...
Patrick Donohue wrote on May 3, 2014 - 6:49pm Permalink
According to the job descriptions they will make "production equipment" including robots. First they will fill up Fremont, then they will make machines for the Giggafactory. Thus they will be totally vertical when done with absolute control over parts inventory and the leanest, meanest "just-in-time" on the planet.