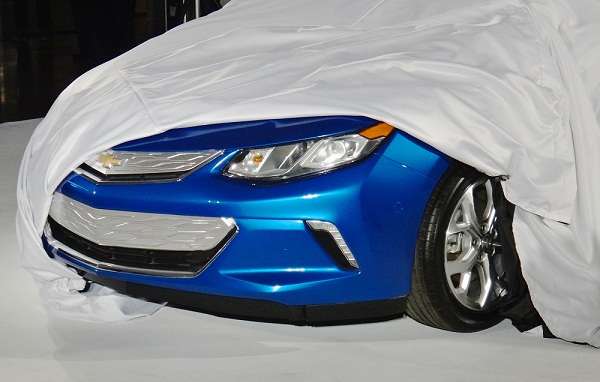 GM needs to change the lower grille on the 2016 Volt

Until yesterday, all we knew about the next-generation Chevrolet Volt’s looks came from a teaser image of the liftgate of the car. Los Angeles-area Volt owners got a full preview of the new Volt, plus a partial front-end view for the rest of us.
Advertisement

A few lucky Volt owners at the Los Angeles Auto Show were the first members of the general public to lay eyes on the much-anticipated second generation Chevrolet Volt. Most seem to have liked what they saw, although we still need some convincing about the grille.

As you can see in the image above, the new Volt will clearly be differentiated from the outgoing version based on styling alone. Overall, we like the aggressiveness of the new look, particularly the upper grille and Cadillac-style vertical lower lights. The blue chosen for the reveal color also looks quite good.

However, the large chrome-y lower grille with the prominent wavy contours will definitely take some getting used to. Initial impression: not a fan, but maybe it’ll grow on me. I can’t help but think it would look far better in black, and from reading initial impressions quite a few people agree.

What about the rest of the car?

The few users on the GM-Volt.com forum who were present at the event generally liked what they saw when they got to see the full vehicle (apparently a testing vehicle, not the show car). Though everyone was forced to sign a non-disclosure agreement, they were able to convey overall impressions.

The 2016 Volt was described as more modern and aggressive, One poster said the 2016 Volt evoked a combination of the Impala and Corvette designs, a decidedly intriguing combo. It does not sound like the new model will look drastically different, nor will it depart radically from the Chevrolet design language. But judging by early impressions of a few, most will like the new looks.

Though they weren’t allowed to say so, we strongly suspect that the sneak peekers got a look at the new fifth seat. One of the negatives attributed to the Volt’s limited appeal so far has been its lack of a fifth seat, which is a deal-breaker for many. We know that GM pays close attention to the demands of its Volt owners, so we fully expect to see seating for five in the 2016 model. Considering that GM declared the new Volt would be “better in every way,” it would be foolish for them not to make room for a fifth seat, even if it is an uncomfortable one for occasional use.

What do you think of the new looks of the 2016 Volt, based on what we are able to see so far? Let us know in the comments.