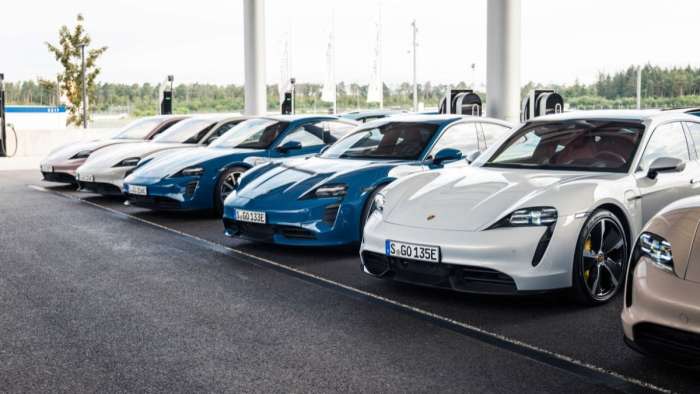 Porsche Taycan Real-World Range - Which battery do you really want?

As more and more high-performance car buyers warm up to the idea of purchasing performance-oriented EVs, Porsche is seeing the Taycan’s popularity increase. With more than one battery option, which one should you buy?
Advertisement

The Porsche Taycan is available in a variety of configurations, which include the base rear-wheel-drive Taycan along with the all-wheel-drive 4S, GTS, Turbo, and Turbo S models. Let’s also not forget the Turismo long-roof body style models for those looking for a little extra cargo capacity. It seems the designers were intent on ensuring there really is a Taycan for every taste.

Enthusiast forums for countless makes and models have long been regarded as an excellent source to find out whether or not recently launched vehicles are living up to expectations. Perhaps now more than ever, with potential buyers often unfamiliar with the ins and outs of constantly evolving EV technology, these types of forums can be an excellent source of information. It quickly becomes apparent that Porsche Taycan owners are more than willing to share details of their experiences, both positive and negative, which helps to ease the concerns of (and perhaps offer words of caution to) like-minded automotive enthusiasts.

Since most Porsche owners are performance fans, initial questions for those in the market for a Taycan are generally geared towards what kind of performance and handling they might anticipate. Since this is an electric vehicle though, another major concern for prospective buyers is just what kind of real-world driving range they can realistically expect. Sure, Porsche publishes official figures on its corporate website, but as we’ve all experienced with ICE and hybrid vehicles of all brands, the actual results when the rubber meets the road can vary significantly.

It should be noted that Porsche offers two different battery options, the standard 79.2-kilowatt-hour battery (A.K.A. the Performance Battery), and the 93.4 kWh Performance Battery Plus (Turbo and Turbo S models are only available with the PB+). It’s interesting to note that while the larger capacity battery does extend driving range of Taycan, a number of enthusiasts have pointed out that it comes at a cost. Sure, plunking down an extra five grand or so will indeed provide somewhere in the neighborhood of an extra 30 miles, but the tradeoff is that the car is heavier as a result. Since one of the significant draws of the Porsche Taycan is that drivers say it feels like a proper sports car, it sounds like many buyers will consider sticking with the base Performance Battery.

A common theme across a number of forums reveals that many of those test-driving Porsche Taycans with PB and PB+ back-to-back struggled to notice any difference in straight-line performance, but felt that the lower mass of the base battery pack made the car feel more nimble in the twisties. For those scouring the internet to get a bead on real-world range for their own peace of mind, it’s important to ensure that the figures you’re seeing are for a Taycan model equipped with the battery pack you’re considering.

It’s critical that you look for figures on cars with the Performance Battery (not the Plus) if your goal is to save the cost and extra weight of the bigger battery.

Interestingly, while many Porsche Taycan EV owners report their experience with range, it’s often the case that the figures won’t represent the full driving range based on utilizing 100% of the battery’s capacity. For example, in a recent post on the Porsche Taycan Enthusiasts (Mission E) forum on Facebook, Howard Bode suggested that his real-world range has been “240 going down to 10%, freeway driving between Vegas and So Cal, running at 70-75 mph. 2020 Taycan Turbo.” In other words, this is only using 90% of the battery capacity.

It’s also not uncommon to find EV owners reporting figures in kWh/100 miles, while still others quote in miles/kWh. For those used to MPG, it takes some getting used to. However, TAYC4S, a member of the Taycan Forum, offers this well thought out approach: “These things are just like ICE in that way. In terms of range it’s pretty much city, highway and average. Translated for me in miles per kW, I’ve seen 1.8/3.5/2.4.”

Tom Bennett cover GM EV news at Torque News and has had a lifelong obsession with cars, spending more than his share of time in, around, (and frequently under the hood of) a wide variety of vehicles. His eclectic taste in cars has led to the ownership of a steady procession of vehicles from nearly every mainstream brand over the past 3 decades. After working in and writing about the foreign exchange industry for over 20 years, he is excited to be shifting gears to share his passion for all things automotive. You can follow Tom on LinkedIn and Twitter for daily automotive news.

Tesla Contemplates A New Strategy for China Retail even As Sales Boom
Jay Leno on Elon Musk & EVs: “I Think He Should Get ... Credit"
END_OF_DOCUMENT_TOKEN_TO_BE_REPLACED