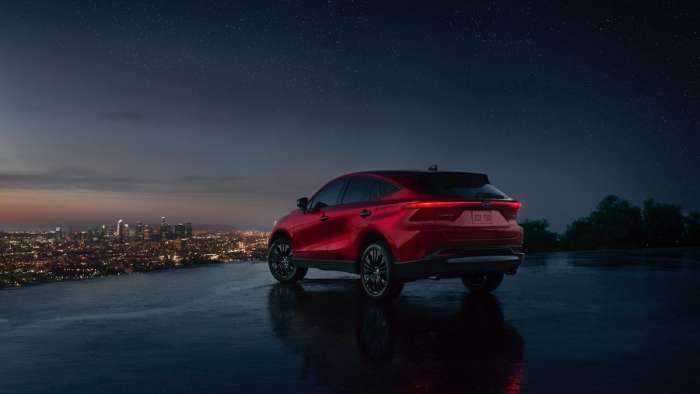 The 2023 Toyota Venza Nightshade Edition Will Drop Some Jaws

Toyota just released their all-new 2023 Toyota Venza Nightshade and its design paired with functionality will change the SUV game.
Advertisement

While the Toyota Venza is not as popular as the RAV4 or Highlander, it delivers no less. With great gas mileage, ample seating, and many amenities, for its price, it is a total bargain. Yesterday, Toyota released a press release saying that the next member of the Venza family will be the 2023 Toyota Venza Nightshade. While the regular Venza is a little more expensive than a RAV4, it delivers way more in versatility, and style. Think of the new Venza as centered between the Highlander and the RAV4.

In the press release, Toyota talked about all of the different changes that the 2022 Toyota Nightshade would have. According to Toyota, “The Toyota Hybrid System II in the Venza combines a high-efficiency 2.5-liter DOHC four-cylinder engine with three electric motors and a lithium-ion battery in a highly compact system.” Now we have seen this system in almost every other hybrid that Toyota makes except the Tundra. Check out our other article on how the Tundra is different. Now, if the Venza Nightshade can get that good of gas mileage, it’s almost as good as the RAV4 Hybrid’s MPG.

The hybrid system delivers 219 horsepower which Toyota calls “lively” however Toyota also said that the Venza Nightshade’s acceleration does not feel any different from a conventional moderately horsepower car. We are starting to see this with many other SUVs. Low horsepower means less gas used however they do not compromise the driving experience. So, it feels like a 350-horsepower car yet in reality it’s at most high 200s. Now the Venza Nightshade will of course have a sport mode and an eco-mode which as we talked about in our last article, doesn’t really make sense.

According to the press release, the nightshade isn’t really a sports model per se yet they still add the Sport mode into the drive modes. Now if you just want to feel the power of sinking into your seat on the highway, I could understand flooring it to feel the torque power. However, why would any automaker think it’s logical to add a sports mode to an economical car? Torque News gets a lot of press cars to test drive and we always test the sport mode. From all the conventional Toyota’s that we have driven that are not sport-oriented yet still have the sports button, none of them feel like a sports car even when you hit that drive mode.

The press release also stated a bigger screen for the infotainment system with all the bells and whistles such as Toyota’s Safety Sense, a free trial of Sirius XM, and all of your cloud apps like navigation, and remote operations from your phone.

With the Limited grade, you will get a 10-inch heads-up display in your 2023 Toyota Venza Showing your speed and hybrid information right in your line of sight so you won’t have to look down or up when driving to see it. I love heads-up displays because as a driver, I tend to fiddle with things while driving trying to find out my song or maybe the navigation. With the cars that we have test-driven, the ones that show your GPS, speed, and other information on the HUD seem to also be very safe cars as well.

With your purchase of the Venza Nightshade, you’ll get Toyota’s 36-month/36,000-mile basic new-vehicle warranty. This will cover things like faulty equipment and so forth. An additional 60-month warranty will cover the drivetrain system like your hybrid and engine systems. The Hybrid battery is covered for 10 years and complimentary maintenance for 2 years which is a great deal.

What do you think of the new Venza Nightshade? Do you like the new additions Toyota is putting in? Let us know in the comments below.