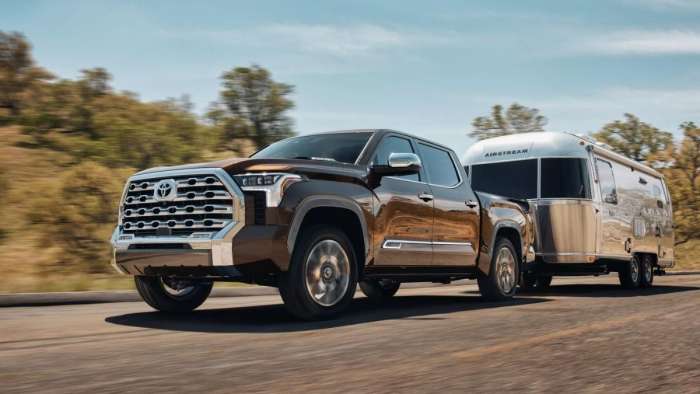 Did you just buy a pickup truck thinking to tow stuff with ease? You probably bought the wrong model. Here’s how the 2022 Toyota Tundra TRD Sport is not a good towing rig.
Advertisement

By now, most of us know that the 2022 re-designed Toyota Tundra has some minor blemishes. Early brake rotors needing to be changed, oil confusion, check engine lights with models under 5,000 miles, etc. However, one thing Toyota really pushed for was how great its towing capabilities are. In a past article, we talked about how the Hybrid Tundra was not really a hybrid but rather a better towing rig because it used the hybrid’s torque to pull heavier payloads easier.

While only having a maximum horsepower output of 389, it is still capable of towing a maximum of 12,000 lbs. That’s 6 tons! While other trucks could do better, the tundra doesn’t sacrifice other amenities for better towing. For instance, you can still have all the luxuries of a nice truck such as leather seats or climate-controlled seats, and so forth. From looking at the specs, it seems that the Hybrid and the CrewMax are best suited for consistently towing high volume weight. However, you should not be towing anything consistently with the TRD Sport model. Here’s why.

Josiah Bigelow shared his disappointment with the 2022 Toyota Tundra TRD Sport’s towing in a post on Facebook’s 2022 Toyota Tundra and Beyond group saying, “this is from a 7x12 carmate with a half-full harbor freight toolbox upfront. On a close mount b&w hitch” He also shared a picture of his rear suspension and it looked like a deliberate Carolina squat. The fender was literally touching the tire. Now a Harbor Freight tool box…not to add a half-full one, shouldn’t squat the entire rear suspension for it to be an inch from the tire. 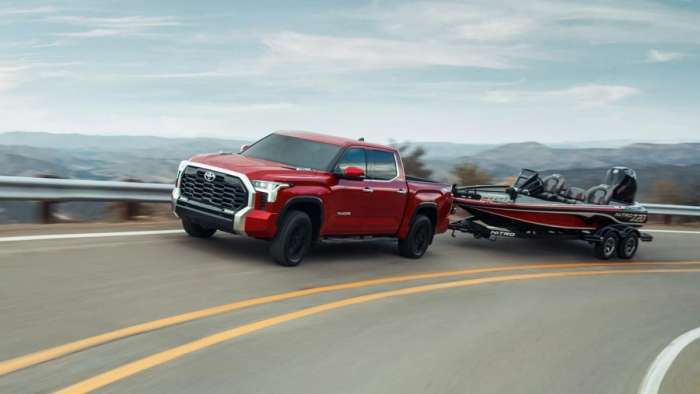 Bigelow has the TRD Sport which from the factory, comes a little lower than other trims. He also added some fat off-roading tires. That itself does not leave a lot of room for things like wheel top to fender height or suspension adjustments. Because the TRD Sport is seen as the performance off-road model of the Tundra, it has a tad bit of a flimsier suspension than the CrewMax trim.

This is because if you are going to be off-roading, you may want a soft suspension, deflated tires, and a much lighter car than say a huge several-ton truck trying to go over a 3-foot-tall rock. Now the picture that he posted (click the link to see it) doesn’t show how he placed his toolbox. If he put it smack dab in the middle of the bed, there may be some axle pressure thus bringing the bed down right on top of the axle.

A great tip is to put heavy things near the cab so that it doesn’t squat your truck. This brings it closer to the center of gravity. Plus, if you break really hard, it isn’t going to come speeding down your bed and hit your cab. Let’s look and see what some of the other owners said.

Eric Fisher commented, “You have a TRD sport which is lowered 1.5in from factory compared to the other grades. Pair this with oversized tires and it will look way worse than it actually is.” From the factory, you get smaller tires than what Bigelow put on his truck. So it is basically an illusion that your truck is squatting hard when in reality it’s really not that bad. Almost no one else had this problem in their truck but some of the people who did put fatter tires had the same problem.

Also, as I mentioned earlier, You need to make sure that your weight distribution is correct. Andy Haugen said, “There need to be some calculations concerning gross vehicle weight, max payload along weight to be had at the hitch. The truck might be able to tow 10000 lbs. but only a percentage of actual weight can be had at the hitch.”

So whether it’s towing a trailer, or just throwing some junk in the back, always make sure to use some simple physics to make sure that you don’t put too much weight on the axle or the tongue. Most of that information can be found in the owner’s manual. Most trucks have a towing section where you can look up how and where to load your payload so you get optimal towing capacity without squatting your truck.

What do you think? Would you still consider towing your payload in a TRD Sport? Do you think this is a big issue? Let us know in the comments below.