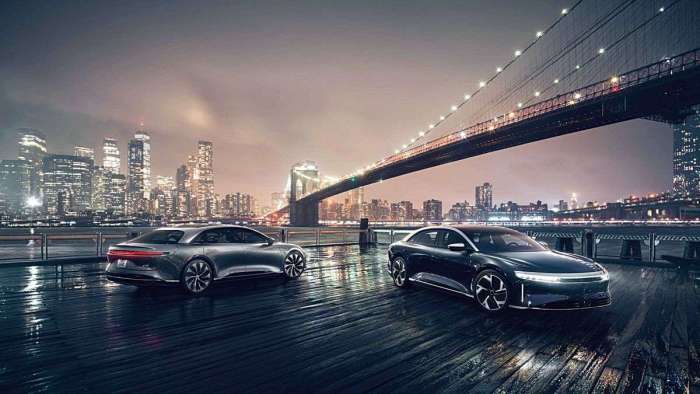 Near Term Catalysts for Lucid Motors, This Is Why Institutions Are Buying Lucid Motors Stock

Lucid Motors is significantly undervalued at $27.43. We are seeing multiple institutions and hedge funds accumulate a ton of shares near these prices after we saw the Tesla Earnings negatively affect Lucid Motors stock price. After the huge dip from the electric vehicle sector, Lucid has had trouble breaking the resistance to $30.
Advertisement

Here is the near term catalysts for Lucid Motors.

Investors will also see if the Saudi Arabia PIF has sold any of their positions. The PIF is the majority holder of Lucid Motors and has made a significant profit from Lucid since they invested back in 2018. Their investment has increased by over 30x, so many were inclined to say that the PIF would sell some of their shares.

After the PIF lockup, which took place January 19th, Lucid has fallen off a cliff from $40 to $27 in the span of 3 weeks. This is obviously not ideal for Lucid shareholders and many of them have seen their portfolios bleed the last couple of weeks. However, there is light at the end of the tunnel because institutions are buying very bullish calls recently, which indicate Lucid could be in for a near-term run.

Lucid Motors Quarter 4 earnings date should be announced any day now. It is a very important earnings call and one that should see the stock very volatile. If we get really great guidance on earnings, we could see the stock near $30 again and try to reach the $35 mark very quickly after.

At the moment the date that is scheduled is a rough estimate. That date is around February 21st based on historical dates of all of Lucid Motors earning calls.

Lucid Motors is starting Grand Tourings production and all indications state that the Lucid Air GT’s have been in production for a little while now. Vin numbers are being sent to customers and it looks like we could start to see the new model on the road very soon.

Lucid has sent out a couple of different over the air updates recently and DreamDrive Part 1 & 2 was implemented in many LucidAirs. That included Adaptive Cruise Control.

Lucid is also hiring 2nd shift workers on the assembly line to ramp up production for 2022 delivery numbers, which should help with guidance.

There is a lot to like about Lucid Motors right now, except the stock price, which has been beaten down. But that is not stopping institutions from buying up all the cheap shares that retail is currently selling.

Lucid Motors has two very important dates coming up and the stock has been on the downtrend for a while. Now is the perfect time for some nice and positive catalysts to jump start the electric vehicle stock.

I was recently on a livestream with Bears Workshop, and we discussed Quarter 4 delivery guidance with Financial Journey. Bear's WorkShop does flyovers of the Lucid factory a lot, he believes that we have most likely produced over 500 vehicles, but deliveries is another story. I would have to agree, I have not gotten into contact with one person that has a vehicle number over 400. That is obviously not an indication of how many vehicles Lucid has delivered, but we do not have much information so we must take it into account.

The most important part of the earnings call will be the updated guidance for the 2022 estimated delivery number. If the guidance for these vehicles does change in a negative way we could see another downtrend for Lucid.

If Lucid maintains or increases that number, then we should see a nice boost for the already beaten down stock. Lucid has received very bullish options calls for the price to spike in the near term. So look out for an earnings date, 13F filing or some surprises that we could see leading up to or during the earning call.