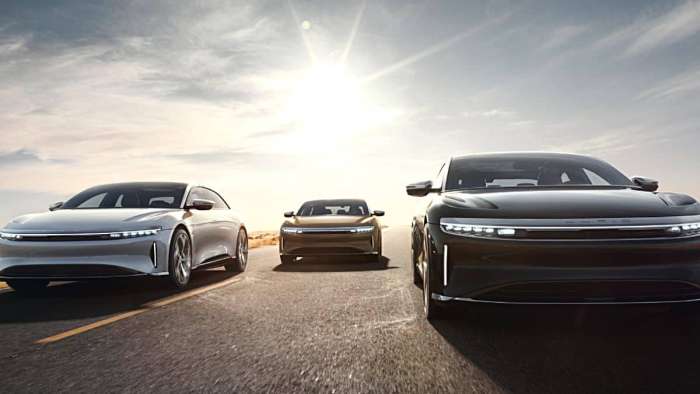 Why Is Lucid Motors So Secretive? And Lucid's Marketing Route

Here is a nice recap of the Bear Workshop Lucid Interview with Financial Journey and what Lucid Motors (NYCE: LCID) investors should know.
Advertisement

On Sunday February 6th, I participated in a Livestream hosted by Financial Journey and joined by Bears Workshop. If you're unfamiliar with Bears Workshop, he is considered by many Lucid investors, enthusiasts and supporters as the eyes in the sky for Lucid. Bear uses his Drone footage and flyovers to update the Lucid community on what he sees in their lot and how many Lucid Airs are parked.

In one of his latest flyovers you see a Grand Touring. This is very interesting because it could foreshadow that the Grand Tourings have been in production for a while and the production of the Dream Editions could be coming to an end soon.

What The Grand Touring Mean for $LCID Shareholders

This would be very bullish for the Quarter 4 delivery numbers depending on when the Grand Tourings have started to be produced. I have heard that they have been in production for a little while. When I asked Bear about how many Grand Tourings he had seen during his flyovers, he said at least two. However, we do not know if Lucid Motors has put caps on the wheels to try and deceive the footage, so he really could not pinpoint the actual number.

Do I think that this 100% means Lucid delivers 577 vehicles? No, Lucid needs to deliver all 520 Dream Editions and 57 Grand Tourings. But this is a fantastic sign that they have at least produced most if not all of the Dream Editions and are starting the next step in the process for 20,000 vehicles by 2022.

Why is Lucid Motors So Secretive?

Lucid Motors has taken an Apple like approach to keeping their day to day operations very secretive. Most if not all Lucid employees, have to sign a Nondisclosure Agreement. Which is pretty standard for a new company. As mentioned in the Livestream by Bears Workshop, Lucid Motors has tried to stop flyovers anywhere near the Lucid Factory. What is Lucid trying to keep from the public? As a Lucid Motors enthusiast, I hope it could be a new vehicle they are testing out, or Lucid simply just wants their privacy.

It does bring up the question, does Lucid have a marketing issue? Wouldn’t Lucid want as many content creators as possible to check out the AMP and the factories like Elon Musk did with the likes of Marques Brownlee and other content creators?

It is most likely nothing and Lucid is just a secretive company, but those that are interested in the Grand Tourings, Quarter 4 Delivery Numbers, Potential Apple Partnership and AMP update, would love to see more content being put out by Lucid Motors and content creators.

Lucid needs to take its own Marketing route

Elon Musk is someone that always finds his way into the limelight. When Elon does, so does Tesla. Tesla and Elon Musk never purchase Ads, because a simple Elon Musk tweet could change the trajectory of Tesla's stock price and even the entire electric vehicle sector. They have that luxury and Tesla already has an extraordinary brand recognition. Lucid is trying to compete with Tesla not with the production and manufacturing, but with Battery Technology.

My Experience Hearing From Both Financial Journey and Bears Workshop

I had such an amazing time with these two incredible and intellectual men. They both have two very different viewpoints on Lucid and that creates a great dynamic for an interview. My biggest takeaways from the interview are that Lucid has a lot of ways to go with their manufacturing as well as their marketing. However, with Bears channel we will get to see a ton of new updates on the AMP and hopefully start to see more Grand Tourings.

For the Quarter 4 Deliveries, I am still unsure about how many vehicles Lucid will deliver. The important part for me is the 2022 guidance. For Lucid Motors to hit 20,000 vehicles delivered in 2022, we need more employees, and Lucid has been hiring more second shift workers. I have heard specifically that these workers were employed for the ramp up of the 20,000 vehicles. If guidance increases, we shall see a huge price increase in an already beaten down $LCID stock price.