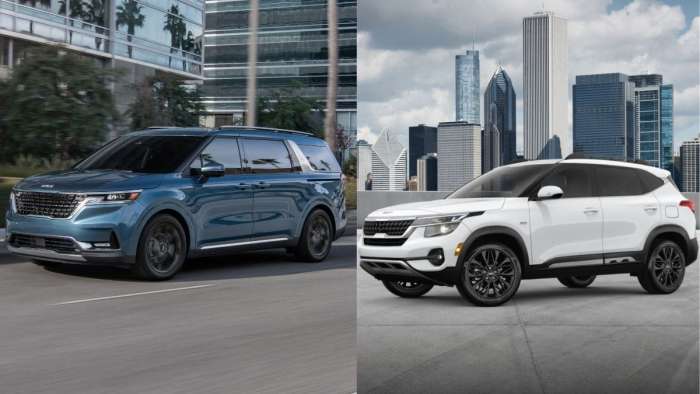 Kia Raises Prices On Some 2023 Models But Not Electrified Models, Yet

Earlier this week, Kia announced small price increases on two of its non-electrified models for the 2023 model year in the U.S. market, the Seltos subcompact SUV and Carnival minivan. These price increases are all less than $1,000, due to inflation and increased shipping costs, and don’t necessarily affect all trim levels of these models. But it begs the question: Will Kia be raising prices on its other models soon too?
Advertisement

This question may be especially relevant to Kia’s electrified models given that they weigh more than the standard gas (and diesel) only powered vehicles, and as such would mean higher shipping costs due to added weight (and potentially extra shipping of additional parts, at least for hybrid and plug-in hybrids). Thankfully, Kia’s price increases on the Seltos and Carnival are modest at between $50 - $470 and $40 - $340, respectively. What’s more, for these modest price increases, Kia is adding more standard features to both models, and for the highest trim version of the Carnival, Kia is actually lowering the price! That should be of some comfort to prospective buyers since they are paying more, but getting more (or paying less, in at least one case).

All of that may make it seem like this news is almost worth ignoring, but when we hold it up to recent announcements from other plug-in vehicle manufactures like Tesla and GM of more substantial price increases to their electric vehicles, it shouldn’t come as a surprise if Kia also raises prices on its plug-in and hybrid vehicles soon too. At the moment, we don’t know as Kia hasn’t made any pricing announcements for its other 2023 models, other than the 2023 Sportage Hybrid (which is a new version for 2023 and doesn’t have a previous model on which to base a price comparison). In my opinion, we should anticipate price increases across the board, or for most Kia models anyway. That may be especially true for electrified vehicles and those standard vehicles with higher technology feature content as the additional costs of batteries, electric motors, and the semiconductors needed to enable additional features aren’t likely to get less expensive in the coming year as demand for these features soars and supply chain issues drag on for the foreseeable future.

How much of a price increase might we expect from Kia on its other 2023 models? This is pure speculation on my part, so please keep that in mind and keep an eye out for news from Kia, or from Torque News, but I think we should expect price increases from Kia on its plug-in vehicles and more modest price increases on at least some of its hybrid and standard gasoline only vehicles for the next model year. However, I do think that Kia’s price increases may be less than those Tesla and GM have announced because so far their increases are concentrated on vehicles that are more expensive (and higher end or lower volume) than any of Kia’s vehicles. If I had to estimate a dollar range for the U.S. market I would not be surprised if prices on Kia’s EV’s increased, at a minimum, of between $500 - $1,500 for next year’s models. For Kia’s plug-in hybrids, I would expect similar price increases, and in the case of both EVs and plug-in hybrids I would also say it isn’t unreasonable to think price increases could be even more substantial than my speculative estimates. For Kia’s hybrids, I would estimate a smaller range of $100 - $1,000 increases due to smaller battery sizes and larger sales volumes to spread things out across. For Kia’s standard gas powered vehicles (as Kia doesn’t sell any diesel models in the U.S.) I would suggest the same pattern of price increases as we see for the Seltos and Carnival as possible. Again, to be absolutely clear, my assertions are pure speculation and I have zero inside information on what additional price increases Kia may have in store, if any.

What do you think? Is it time to start adjusting your budgets at all if you plan to buy a new 2023 model year Kia? Would a price increase sway your decision one way or the other on a new Kia, and if so, how much of an increase might change your mind? Please leave any questions or comments below.