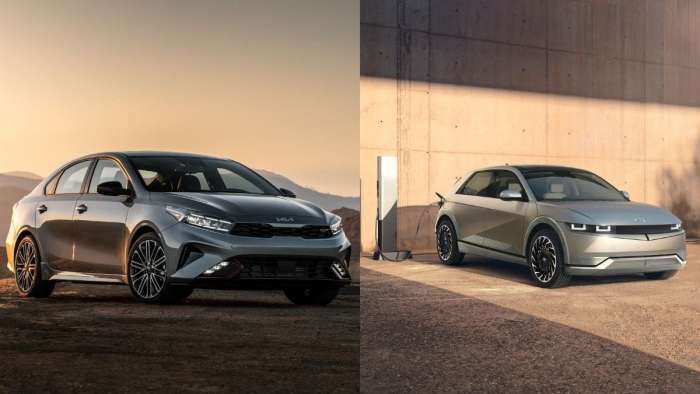 Kia And Hyundai Combined Outsell Honda In The U.S. For First Time

Honda is losing ground to South Korean brands Kia and Hyundai and it is in part due to Honda’s lackluster investment in electrified vehicles. While it may not seem fair to compare the combined sales of two brands to Honda alone, I would argue it is. Kia and Hyundai are essentially the same family and share engineering, platforms and technology similar to the way other brands share nameplates.
Advertisement

Honda offers 3 HEV vehicles (Insight, Accord and CR-V) and one PHEV, the Clarity. According to Car and Driver, the Clarity’s production was discontinued in August 2021 but is still being sold, for now. While Honda’s 3 HEVs are top quality, very efficient, and even saw a 67% increase in sales over 2020 according to Reuters, Kia and Hyundai combined, with more electrified models on offer in 2021 than Honda, outsold Honda by well over 100,000 vehicles (if we leave off Acura and Genesis sales and only count Kia with Hyundai vs. Honda sales). For 2022, Kia and Hyundai will offer 8 HEVs, 5 plug-in hybrids, and 5 EVs, which is more than they did in 2021. Kia and Hyundai will also offer electrified model types that aren’t available from any other non-luxury brands too, like the 3 row Kia Sorento PHEV SUV. Honda, Toyota, and every other traditional automaker that isn’t offering as much electrified model selection as these sister brands may be losing market share to them already. Add to that the typically lower price point, better warranties, critical acclaim, and available tax rebates for (plug-in) Kia and Hyundai models that will be readily available for longer than at least 4 other brands, and you’re looking at very favorable conditions for the two South Korean brands.

Hyundai and Kia also have very compelling traditional ICE vehicles like the Palisade/Telluride SUVs, the top selling Forte sedan, and other sedans and smaller SUVs that were the real “bread and butter” of their sales in 2021. Gasoline powered vehicles will certainly be similarly important to their 2022 sales and beyond, because Americans (at least) still seem to favor gasoline powered ICE vehicles, as MSN.com and Deloitte recently pointed out. But what matters here, and what I think Deloitte’s research misses or perhaps glosses over, is that a combination of R&D, government regulation, and market forces are going to accelerate the penetration of electrified vehicles year after year for the foreseeable future (barring worsening of global supply chain or geopolitical issues that might constrain growth).

Think back to the dawn of the smartphone era in the early 2000’s. The first offerings from Blackberry, Microsoft and others were the first wave. They sold in some significant numbers but didn’t really take over the market. But then in 2007 when the iPhone debuted, and about a year later the first Android phone followed it, a market shift began that led to the total domination of the consumer cell phone market, pretty much world wide, in the matter of years. Cars are much more expensive than smartphones, at least for now, so we aren’t going to see the same timeframe of change as new EVs, PHEVs and HEVs roll out, but as Kia, Hyundai and other traditional manufacturers release more and more electrified vehicles, as our nation builds out its charging infrastructure, and as more people are exposed to the superior performance of electrified vehicles (especially those that plug in), traditional ICE sales are going to decline. It doesn’t mean ICE engines are going away anytime soon, but by the middle of the next decade, pickings will be slim. The fewer ICE vehicles that are made, the more expensive they will become to purchase and fuel as economies of scale shrink. This will only accelerate the switch to alternatively powered vehicles.

With no plug-in vehicles on the horizon this year or next for Honda, I predict Honda will see lackluster sales growth the next few years unless they try something drastic, like aggressive pricing models or perhaps an ultra competitive new HEV. Meanwhile, Kia and Hyundai’s sales will continue to show strong if not outstanding growth for the reasons I stated above. And though Toyota managed to unseat GM this year to become the number one selling brand in the U.S., they should not be resting on their laurels. Kia and Hyundai are almost certain to achieve significant conquest sales given their two Japanese rivals’ dearth of plug-in options. The South Koreans will also only increase pressure in the HEV market that Toyota and Honda currently lead, as well. What do you think? Leave your comments below.

Images provided by Kia and Hyundai

John Goreham wrote on January 12, 2022 - 4:31pm Permalink
Great scoop! This is a big deal. I'm not surprised. Although I am a long-time fan of Honda, the Hyundai 10-year warranty and three years of included maintenance will be important to me when I shop for my next vehicle. Honda is far behind with regard to these aspects of the ownership experience.
Justin Hart wrote on January 13, 2022 - 2:31am Permalink
As am I! Almost every vehicle I owned until I bought a Nissan LEAF back in 2011 was a Honda. I know they are actually a much smaller company than Toyota or Nissan. Having lived in Japan for a number of years I was surprised how few Hondas I saw on the roads there, but that is because it is overseas (from Japan) where Honda has been the most successful. I fear that they will struggle greatly in the change over to new forms of propulsion; they lack Toyota and Nissan’s deeper pockets and broader “alliances” and partnerships with other manufacturers. I was surprised to hear they are collaborating with GM and will use their Ultium batteries in the near term though. It will be interesting to see how successful that collaboration might be... if it doesn’t work out well for Honda, I fear the worst for them. Hopefully their plucky and creative history will help them persevere though.
peter wrote on January 13, 2022 - 5:05am Permalink
Thanks for providing such an informative essay on automotive engines.It is quite beneficial to us. We also provided used car engines.