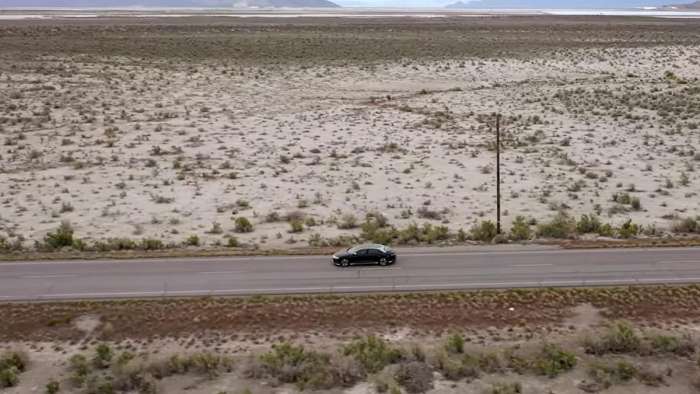 You wouldn't want to drive your Lucid Air like this, but therein lies the beauty of hypermiling.
Advertisement

The Kilowatts is one of the best YouTube channels around when it comes to EV content and they've been having some fun (if you call driving at 27 mph for hours on end fun) with a Lucid Air Dream Edition equipped with the range-friendly 19-inch wheels. The result is a new record for EV distance driven on public roads and the lengths they went to in order to achieve it are pretty wild.

The Route
The record route needed to check a few boxes to be suitable. Ideally it would be long, flat, near a charger from which the team could start, and it needed to have little to no traffic. After a bit of scouting in the Air while the other half of the team hooned about on the Bonneville salt flats in a Rivian R1T a route from Nevada into Utah was selected.

Starting from the Electrify America charging station in West Wendover, Nevada the team drove through the night on a service road alongside the highway into Utah. With that leg of the journey completed they drove back and forth along a 15-mile stretch of near-deserted road near Great Salt Lake. Switching drivers every three hours the team maintained a constant 27 mph, shifting to neutral and coasting to a stop when it was time to turn round or switch drivers.

Driving at that speed for hours on end doesn't sound like much fun, but that what the Kilowatts team calculated was required for proper Lucid Air hypermiling. If you're unfamiliar with this oddball corner of automotive culture, hypermiling is the single-minded focus on distance and eking every inch of travel from a vehicle's fuel source. If that means tailing a big rig at ten under the speed limit with the windows rolled up and no AC then so be it.

Record Prep
Obviously the team couldn't use the Lucid's climate control systems so the glass roof was covered with a sunshade and a battery-powered fan was employed to keep the pilots cool. The tires were over-inflated to cut down on rolling resistance as much as possible and the team went as far as removing the floormats, each weighing but a few tens of grams, to save as much weight as possible.

Thanks to the Lucid's tire pressure monitoring system the team discovered that one of the Air's tires had a slow, creeping and range-robbing leak. Luckily a Lucid service van was nearby to switch out the offending wheel for a properly inflated one during a driver change stop but the Air's efficiency still took a hit. 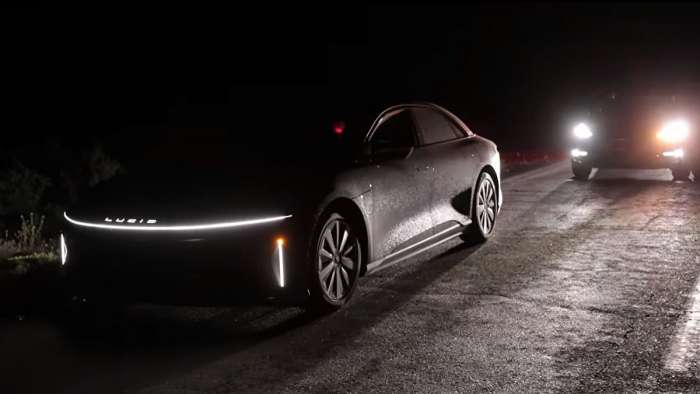 After travelling an amazing 687.4 miles the Dream Edition's battery finally ran out of juice and the car coasted to a halt, though it tried to continue a couple of times as if it had joined in the deranged spirit of hypermiling with the team.

Ryan from The Kilowatts puts the car's record-breaking range down to the efficiency of its in-house electric motors and low drag coefficient. Maybe these weren't real-world driving conditions, but 687 miles is still damn impressive and gives the Lucid Air yet another record. Check out the full video below.