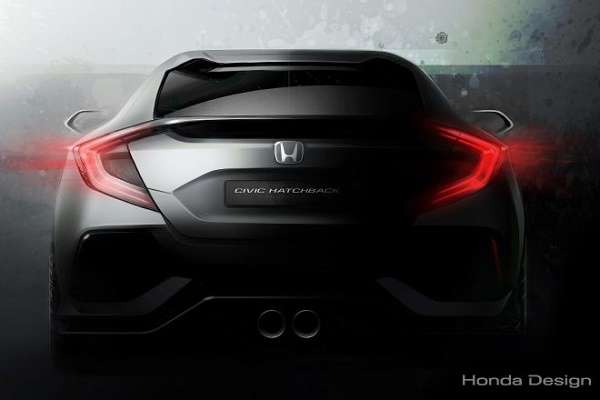 There’s much more to the hatchback craze than rear hatch access and utility. But that’s a big part of our “like” factor.
Advertisement

While driving Honda’s exceptional 2016 Civic Coupe in San Diego, California, a realization swept over me like a warm August wind blowing over the calm expanse of the Pacific Ocean. I would wait on my purchase of a 10th generation Civic for the Spring 2017 arrival of the Civic 5 door hatchback -- and my choice would not be the long anticipated Civic Type-R.

For me and thousands like me, a car’s performance is measured in direct relationship to the dedicated purpose of the vehicle. Sure, I love to drive fast, but like most folks, my car is used for everything from daily commuting to hauling fasteners, hay and lumber from the local hardware, farm supply.

Although I don’t require 300 horsepower to haul hay, or commute into town, I do appreciate a comfortable interior, exceptional styling and a refined ride. The 2017 Civic Hatchback is constructed on the same world platform as the Civic Sedan, Coupe and near future Civic Type-R, insuring a quality ride and exceptional “C” segment leading performance.

2017 Civic Hatchback to return the mark to great utility

Like I said, I love to drive, and truly, I rarely drive a car that I don’t find some value in. But for me, a hatchback variant not only captures the eye, offers great utility, and generally combines the best attributes of a car and a minivan, but can double as a mild performance sled, and pick up truck when needed.

A Honda Civic Hatchback variant’s been available in North America 6 out of the last 9 generations, the 10th generation will make 7. Next week Honda will reveal the 2017 Honda Civic 5 door hatchback at the Geneva Auto Show. Honda refers to the hatchback as a concept model. But based on this spy shot, thanks to our friends at Autoblog.com , I’m willing to bet that the production version will be very close to the show car.

Truth be told, Honda Civic has served as a hatchback or station wagon more in the name plate’s 41 years than it hasn’t. I for one, am happy to see Honda offer a Civic hatchback variant in model year 2017, and look forward to drive reviewing one sooner than later.

Despite what you’ve read of late as to the unfortunate recall of the 2016 Civic 2.0 normally aspirated Earth Dreams ™ power plant, my experience with the mill, when paired with Honda’s exceptional 6 speed manual transmission is a positive one.

While driving the back roads of Southern California in the reinvented Civic Coupe, I discovered the “sweet spot” in fourth gear while traversing down a two lane country sweep. Producing 10 % more torque than the outgoing 9th generation Civic, I found the base model to be most impressive.

looking to the body line of Honda’s new coupe, the near future hatchback design was evident in the rear window and trunk line -- that’s when it hit me. The realization of the greatest value found in a new Civic for me would appear in the manifestation of a 5 door Civic Hatchback, the same manufacturing platform that Civic Type-R would ride on, albeit a bit tamer and hopefully much less expensive to purchase and maintain.

Granted, I’m currently a hatchback driver, and despite the fact that I have extraordinary access to many brands and variants, mundane through super-sport, all wheel drive, front wheel drive, and live axle, a t the core of my being, I’m a Honda fan. And while I do appreciate the extraordinary utility of Honda Fit and HR-V, I could use a bit more room and greater horsepower.

Besides, I’ve been taken hostage by the best looking, best riding Honda Civic in the maker’s history. I’ll wait a few months for my perfect hatchback. Hopefully, I‘ll find one wearing the big “H.”