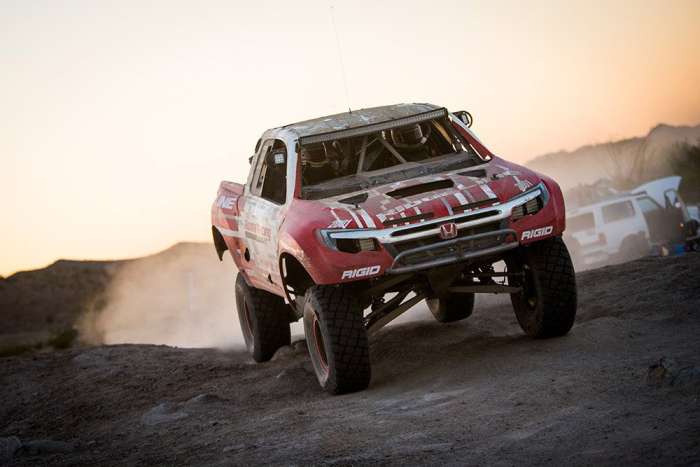 setting the record straight: While Honda News herald's Proctor Racing Group and Honda Performance development Baja Race Truck for winning its class in the SCORE Baja 500, there’s a bit more to the story than that.
Advertisement

With temperatures on the course exceeding 120 degrees F, the 3.5 Liter turbocharged V6 Baja Race Truck completed its class in the 2016 running of the Baja 500. And, as in the the Baja 1000, it was most likely running solo in the turbocharged unlimited classification.

Putting a factual twist on the story

I mention this only because as we reported on the SEMA Las Vegas reveal of Baja Ridgeline, consumers asked Torque News where to purchase the fender flair and accessory kit required to “lift” their stock first generation Ridgeline pickup to Baja race specification.

It ain’t going to happen Johnny! 2017 Honda Ridgeline is off-road capable, but not for Baja!

Enough said, finishing the Baja 500 in what is being called the most grueling running of the race in history -- without a mechanical breakdown, is nothing short of a miracle.

*The Honda Ridgeline Baja Race Truck is now two-for-two in competition on its namesake course, as drivers Jeff Proctor and Jason LaFortune claimed the Class 2 victory in last weekend's 48th running of the SCORE Baja 500, adding to their previous triumph last fall in the Baja 1000.

And, according to Honda and Jeff Proctor: This year's Baja 500 also turned tragic, as two motorcycle racers and a spectator lost their lives in three unrelated incidents during the race. Despite the obstacles and high attrition, the Ridgeline Baja Race Truck ran trouble-free, completing the event in 14 hours, 19 minutes and 19 seconds.

"I'm so pumped to get this Honda Ridgeline to the finish of the Baja 500! I can't thank Robert Zeman enough for navigating a smart race, and Jason LaFortune and Karl for bringing the truck to the finish first in class," said Proctor, driver and owner of Proctor Racing Group. "Our crew nailed our pit stops and kept this fire-breathing Honda twin-turbo cool, even when we encountered 124-degree temps in some sections of the race!"

Kaku Mian wrote on December 26, 2020 - 7:47pm Permalink
Trying to prepare a Ridgeline for 3 Rallies in Pakistan. This will be a first for a Ridgeline to race against Tacoma's, Hilux and similar trucks in off road semi arid conditions. Is there a reliable turbo or supercharger available. Any other suggestions would be appreciated.