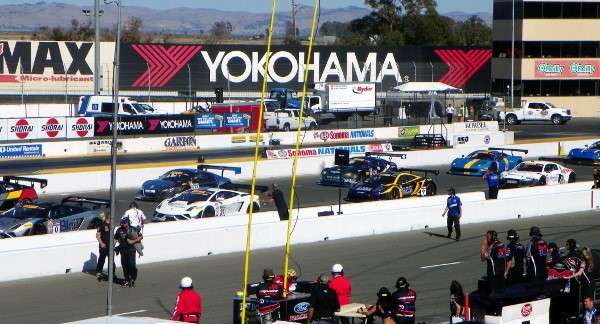 Despite the combined efforts of Acura, HPD and Real Time Racing, the Pirelli World Cup Challenge debut of TLX-GT has been largely a bust. Torque News looks to the back story.
Advertisement

I had the pleasure of sitting down with the winningest team owner and driver in Pirelli World Challenge history at Sears Point Raceway Sonoma. That was a Sunday, less than 24 hours prior, Peter Cunningham of RealTime Racing had been rear-ended by Santiago Creel of Mexico City driving an Aston Martin GT4, at the standing start of race 1 on Saturday. And, we had collectively experienced the American Canyon earthquake at 3:20 am Sunday morning.

It appeared that somehow, one of the winningest race car drivers on the planet had dumped his clutch at the standing start and stalled the TLX-GT. Although taking full responsibility for the stalled start, Peter would share with us that in his nearly 3 decades of racing he had never stalled at a start, we look to the hardware. Cunningham holds Santiago Creel harmless in the accident. According to Peter, Creel did not have time to avoid hitting the TLX-GT.

The back story: We discover that Peter Cunningham is a very successful specialty automotive development and manufacturing business owner. This guy doesn't have to race, it’s his passion. His ties to Acura and Honda racing go back decades. The manufacturing arm or RealTime builds 4 cylinder racing engines in Saukville,Wis. for Honda powered Racing.

Peter Cunningham has been participating in Pirelli World Challenge since 1993 and originated RealTime Racing in 1987; this man holds some serious seat time.

Sitting at a breakfast table with HPD, Honda Racing’s Art St. Cyr, Vincent Manganiello of Acura Public Relations and Brian Nelson technical resource for Honda Cross-Brands Public Relations and Peter, I soon came to realize, Peter Cunningham is the calmest team owner, driver I’ve ever encountered the day after being rear-ended at the start of a race at 60 miles per hour.

Let me clarify, Cunningham showed no visible signs of personal injury or corporate driven against, the man is a lesson in calm meets patients, perseverance and composure.

The rest of us where walking on eggshells and to put it lightly, the RealTime Race Team and HPD’s Art St.Syr were not happy. Art kept talking about how the TLX-GT needed more track time, while Peter and others brushed off the real issue at hand. The development of the RealTime Racing TLX-GT may have been pushed up a bit to coincide with the release of the 2015 TLX.

Plagued by earlier track testing problems, a rumored wiring harness meltdown and fire, TLX-GT development sat in a state of limbo while replacement components sat out there in cyberspace somewhere. Mid Ohio was the maiden voyage for TLX and that was rained out. none the less, Peter Cunningham and TLX-GT made an impressive visual show if not a top 10 track run.

Looking to Saturday’s Sonoma accident, Acura’s superior structural crumple zone may have deflected some rear impact force, Peter points to a damn good seat, helmet and a rear-view camera for the fact that he was sitting here talking with us on this fine racing Sunday.

While that may be a given for those fortunate enough to develop and race cars for a livelihood, we took a closer look at the development timeline of the race car as it coincided with the release of Acura’s next big thing.

It takes thousands of man hours to develop a winning race car. Most teams have two or three back up cars sitting in the paddock on race day, there is one TLX-GT.

2015 TLX-GT is a compilation of high and low-tech racing technology attached to and around arguably the most rigid and deflective body cage in Acura’s history. Constructed of alloys, steel and carbon fiber, TLX-GT utilizes a factory Acura engine block and heads, that’s it! The balance of the car is fabricated by HPD and RealTime Racing, utilizes outsourced racing transmission, 4 wheel drive, and has little in common with the production TLX.

Weighing in at under 3,000 lbs and powered by a HPD built twin turbo 3.5 liter 1-VTEC SOHC V6, rated somewhere in the neighborhood of 580 horsepower, TLX competes in GT. Pitted against some of the baddest super-cars on the planet, racing under mixed-class track conditions. looking to the Pirelli World Challenge GT line up, we believe that Pete’s up to it, we’re not sure the car is. TLX-GT may be out torqued and horse powered by Bentley, Cadillac, Ferrari, Porsche and others, we won’t know until 2015.

Despite a rocky start with a brush-off from the Bentley Super 8 at Mid-Ohio and a debilitating crash at the standing start at Sears Point, Peter Cunningham of RealTime Racing states with conviction that the TLX-GT is mechanically trouble-free, that all systems work well and that the car continues to gain speed with each lap run.

Peter looks to TLX-GT to do well next season with the addition of a second car and driver. When asked, Cunningham defaults the choice of his future teammate to HPD and Acura racing. 52 year old Cunningham quips that his team mate will most likely be a younger driver.

Unfortunately for Acura race fans, Peter Cunningham and RealTime Racing was a no show at this weekend’s final race of the 2014 Pirelli World Challenge. We will assume that the 2015 TLX based GT was too severely damaged at Sonoma to be rebuilt in time for the Miller Pirelli World Challenge in Tooele,Utah, quite the truck hall From Saukville. We also hope that Peter Cunningham did not sustain lingering injury in the Sonoma accident.

We wish Acura Racing, HPD, Peter Cunningham and the RealTime Racing crew a quick recovery and best of luck and skill in bringing the TLX-GT program up to speed. Torquenews-Acura looks forward to reporting next season’s Pirelli World Challenge action when RealTime Racing returns to the track with a two car effort. We believe 2015 Will be an exciting race season for Acura TLX-GT.

Parks McCants wrote on September 16, 2014 - 11:41am Permalink
We received an e mail from Peter yesterday. He kindly explained that the damage to the TLX-GT had been extensive. I'm thinking a total rebuild. The team required another week to complete the repairs and missed the starting grid for Miller. Peter tells us that they'll be back on the test track very soon and expects to participate in series racing March 2015. Our thanks and best of luck and skill to Peter Cunningham and RealTime Racing, a class act!