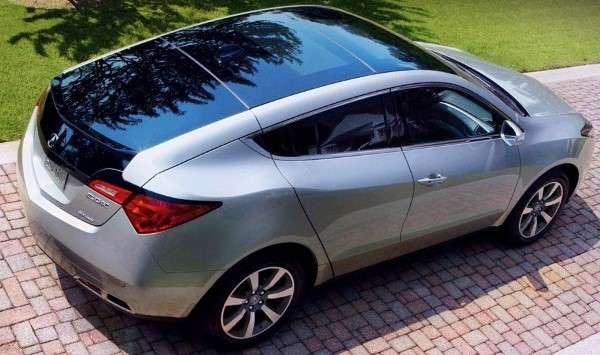 The first time one views Acura’s retired ZDX Crossover, the question as to what is it, and where can I find one? comes to mind. Acura’s lowest production volume vehicle of this millennium is destined to be a collector car.
Advertisement

The first time we viewed Acura ZDX working its way through a high-end retail shopping center, we weren’t quite sure what we were looking at; an upsized Chrysler Crossfire, BMW X6, Volvo XC60 re-do? We’d previously encountered the soon to be outgoing Honda Crosstour, and while ZDX does sport a distant cousin similarity to Crosstour, ZDX design takes the quirky organic, hard body line, fat rear-end design attributes of Crosstour and Acura-izes them.

Cadillac CTS wagon had nothing on this beast; what was it? ZDX is that full figured gal down the street with the pretty face; tough to dismiss, impossible to ignore. Perhaps ZDX was under marketed, or the U.S. just wasn't ready for this exceptional looking sports- hatchback with true off road capabilities.

Interestingly enough when introduced at the 2009 New York International Auto Show as a 2010 model, ZDX was not referred to as a Crossover. Concept designer Michelle Christian had labeled the groundbreaking automotive departure as a “4-door sports coupe” while Acura PR stated ZDX “blurs the distinction between coupe, sedan and sport utility vehicle;” it still does. You won’t find anything else like ZDX on the road today.

An Acura of many firsts

The First Acura design to come out of Honda’s Torrance studio is just different enough to separate the ZDX driver from the sport-crossover crowd. While originally directed at the premium U.S. crossover market, caught in the doldrums of a then floundering U.S. recovery, ZDX didn’t sell well.

Tech? Yes, it has it all: Available in 3 trim variants, ZDX can take you from a decent stereo and Bluetooth connectability to state of the art Acura/ELS Surround premium audio as found in 2015 TLX with voice command navigation; but, it doesn’t come cheap.

Built on the Honda Pilot, Acura MDX platform, ZDX features SH-AWD for exceptional sure footed on and off-road traction and handling. ZDX was the first Acura to feature a 6 speed automatic transmission. Coupled with the maker’s mechanically bullitproof 300 horsepower 3.7 liter V6 this midsize crossover is fun to drive and mechanically reliable.

Unfortunately for Acura ZDX $2 gasoline arrived a year or two too late. A stated MPG of 16 city/22 highway slowed ZDX sales to a crawl in a day of $4 per gallon gasoline. And, for those not concerned with the price of gasoline, a beginning MSRP of $45,495 to $57,995(2010) drove would-be ZDX buyers to competing brands.

Looking to recall records we discovered ZDX to be one of Acura’s most reliable offerings. With only one initial side airbag recall, manufactured quality is not the issue as to low volume ZDX sales.

Why Acura ZDX is destined to be a collector car

Introduced in April of 2009 as a 2010 model, ZDX production ended in 2013. Looking to the numbers: We find ZDX to be the rarest of U.S. manufactured Acura offerings. With a total of 7191 vehicles produced and sold in North America, exceptional styling and several Acura firsts, ZDX is destined for car collections the world over.