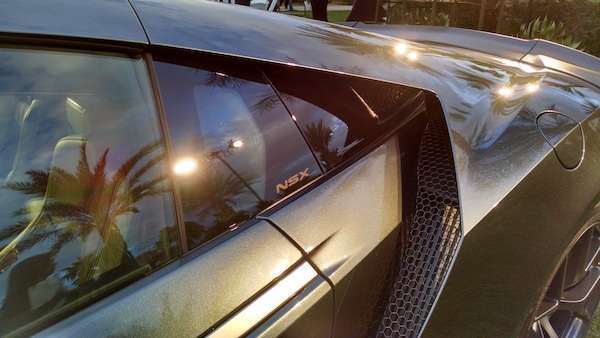 Unless a sports car is dedicated exclusively to track duty, at the end of the day, even to most exotic entry must inevitably double as a viable commuter, such is the case with 2017 Acura NSX.
Advertisement

Acura engineering not only claims that 2017 Acura NSX Hybrid-Sport Supercar, is race-track ready off of the production line, but mechanically bulletproof, refined and comfortable enough to double as a viable daily commuter. While that may be a bit of a tough sale between husband and wife, fiance, and the family dog, I personally have but one nagging concern remaining before ordering mine -- can I comfortably fit in it?

It’s not the price point, it’s the shoe size

The second week in April marks my opportunity to actually sit down behind the wheel of the Acura NSX mid engine 2-seater and drive it. Personally, I’m as nervous as a 16 year old tech-geek at a high school senior prom -- on a blind date with the school’s slightly over sexed lead cheerleader. Do I truly belong here?

Sure, I’ve owned my share of shoehorn tight exotics in my time, and often, more than a bit of compromise and self acceptance has been required to justify not only the initial purchase of that Fiat Dino, Lotus Elan or Porsche 911s, but the often painful practice of actually driving the darn thing.

Unlike the inexperienced 16 year old geek in the prom story, my history with NSX goes back to the 1990s. Of Course the original manifestation of the first generation Honda NSX while arguably a Ferrari killer, was not spacious, ride-easy on the bones, nor overly powerful by supercar standards -- it didn’t have to be. But then again I didn’t tip the scales at 230 lbs, nor was my right hip and left knee shot.

And then there was the pre touch-screen, active safety feature simplicity of first generation NSX, aluminum but down to basics, in a pure Honda racing sort of way. No turbochargers, multiple motor hybrid torque vectoring or near autonomous driving capability. Hey! One had to manually adjust the valve lifters.

What NSX of the 1990s brought to the market was a reasonable price point, good looks, and mechanical reliability unknown to the balance of the mid engine roadster segment. There was nothing else like 90s NSX on the road, it was uniquely Honda racing, and heavily impacted Ferrari, Fiat, Lotus and Porsche sales on its market release, and continues to draw crowds a quarter of a century later whenever it appears on the scene. That was then, this is know.

In other words, the first generation NSX became an instant collector's car from day one. But, the original NSX was, and remains motorcycle simple -- in engine, drivetrain and electronic systems, something that 2017 Acura NSX is not.

When the all new NSX hybrid finally comes to market in April 2016 after a near decade absence from the supercar scene, it will be the most technically advanced car in Acura history -- also the most expensive of any major manufacturer produced car in North America. Acura discloses MSRP and specifications here.

But that doesn’t concern me. As earlier stated, I only have one concern when it comes 2017 Acura NSX. Will my 6 foot 5 inch frame fit comfortably, without compromise, within the driving confines that is Acura’s halo car? I’m ready for the future in automotive engineering, is it ready for me?
I did have the opportunity to sit in 2017 NSX while interviewing Acura’s Michelle Christensen at the Los Angeles Auto Show. I made it work, but that’s far from driving NSX.

Exciting times in the evolution of the automobile

On Tuesday, I, along with a chosen few, will have the exceedingly rare privilege of driving the car that will change the way consumers look at Acura, and perhaps automotive engineering as a whole. As Acura, Ford and other makers integrate gasoline/electric hybrid technology into sedans, crossovers, light trucks and SUVs, NSX - like very smart hybrid technology, may become the norm instead of the exception. I'm excited, stay tuned.