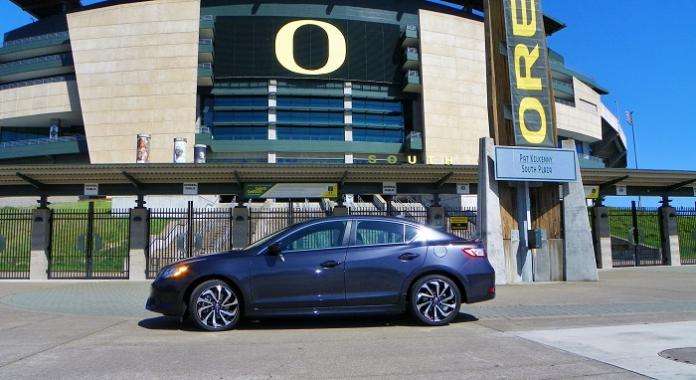 It’s that i-VTEC exhaust tune note that only a high-revving naturally aspirated Honda 4 banger can make that drives old-school Civic Si fans away from the next generation turbocharged engine. In rolls the 2018 Acura ILX.
Advertisement

You read it every day on 7,8, and 9th generation Honda Civic forums. Sure, the new generation 1.5 Liter, direct -injected turbocharged Civic is cool enough, but it doesn’t rev up or sound like the old school i-VTEC 4’s of yesteryear. Honda’s premium car division Acura, holds out for model year 2018 with one of the last high performance naturally aspirated 4 cylinder gasoline engines left standing in the halls of Honda; or in the auto industry for that matter.

As the world turns to turbocharging and direct fuel injection for higher fuel efficiency, increased, across the power band torque, and near zero exhaust emissions, Acura holds onto a decade long engine design; a great one at that. Need more? Check out this Acura.

Personally, I grow weary of reading concerns generated by otherwise well meaning old-school Honda owners. They look back to the day when the average small displacement turbocharged engine was more often than not done, fryd, spun, burned out, and wasted, in 60,000 miles or so. Me, I own a twin turbocharged 6 cylinder engine with 136,000 miles showing on the O.D., it’s as tight as the day Volvo installed it in my S80. Nonetheless, I do understand the concern -- Volvo is not Honda.

And, while Honda is the largest engine manufacturer on the planet, the 10th generation turbocharged Civic Si is in its first few months of production -- although, we do read back from our Torque News loyal that have clocked 40,000 miles or more on their respective Civic Sedan, hatch touring, etc. The new turbo will most likely prove to be exceptional.

Albeit an entry level trim. Back in 2015, and then again in 2016, I wrote a week long drive review on the Acura ILX A-Spec. Back then, it sported Acura’s equivalence of a detuned 2.4 L i-VTEC Civic Si engine. Through the engineering magic of staged air induction, ILX A-Spec came on like a turbocharger without the hardware, or turbo boost.

And, although you can no longer opt a 6-speed manual transmission for ILX, the 8-speed DCT (dual clutch transmission) with wheel mounted sequential paddle shifting is a blast! Sure, Acura ILX at any trim level may not be as edgy as an old-school SI, but you’re not as young as you were back in the day. And, Acura ILX may be a much easier sell to your significant other.

Me, I like the idea of tuning Acura ILX A-Spec, It wouldn’t be much of a stretch to take it into 9th gen Civic Si performance territory. And, you could take a modern comfort and safety feature along for the ride. For my latest slant on 2018 Acura ILX, read on.

Elon Makes a Cybertruck Statement With an Action, But Quiet in Words
Tesla's Record Month in China: Doubled Registrations in March 2021
END_OF_DOCUMENT_TOKEN_TO_BE_REPLACED