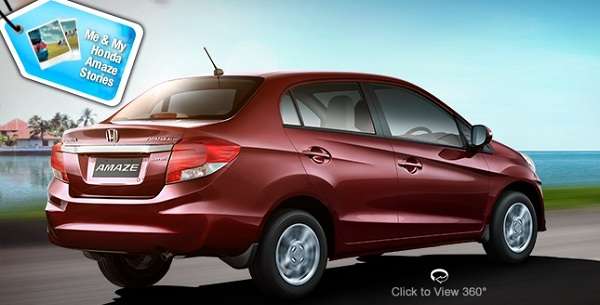 While you won't see an Amaze diesel powered sedan in America ( yet) Honda has introduced the low cost 2013 sedan to India with great success. Base priced at $14,600 and claiming 70 mpg, Honda of India sold 50,000 units in its first 2 month of production. Is there pent up consumer demand for an efficient, well built metric clean diesel powered sedan in America?
Advertisement

What about the International Honda Civic i-DTEC 2.2 liter 4-cylinder,or the 2014 Honda CR-V 1.6 i -DTEC.? Both cars are receiving positive reviews and brisk sales in South America and Europe, but nowhere to be found in the United States.

52% of all sedans produced or sold in Europe are diesel engine powered, not so in the U.S. For the North American market, Honda seems intent on expanding its Hybrid offerings, while presenting Fuel Cell alternatives to an ecologically aware clientele.

History tells us that diesel technology received a bum rap in the U.S. thanks to early attempts by G.M., Mercedes and others to corner the diesel automotive market of the 1980s.

It actually goes back a bit further than that. I’ve found memories of my grandparents under-powered 220 D of the 1960s. As a kid, I found the dash mounted “ glow plug” indicator to be fascinating. Gramps loved the 40 miles per gallon. However, finding fuel was problematic, and performance wise, the car was a dog. The 190, 200 and 220 D series would go on to become a mainstay for the taxicab industry; worldwide.

The car rattled and smoked a bit, but was a solid as a rock. Their 220 had the laughable tail fins, cream on red interior, with just enough chrome to fit into the American market of the 1960s.They would soon trade the Mercedes off for a Pontiac Catalina. Today, if you can find a 190 or a 220 D, the car is a collectible.

I would later own a 1980s Mercedes Benz 300 turbo diesel 4 door. Back in the day, I loved it. Sure, it was a little clunky and smokey compared to my gas 280 SL, but the reliability and mileage was second to none. The big boat would average 30 mpg in style and comfort. A comparable gas model of the day? 14 mpg + or -. The Mercedes was handed over to a brother-in-law 2 years ago. It registered 380,000 miles on the odometer and was still running.Bullet-proof reliability...

On the ‘affordability’ front of the 1970s and 80s, Volkswagen would reign supreme with the introduction of the “ Rabbit,” diesel 2 door and Rabbit based pickup truck. Toyota and Nissan took a stab at the market, but retreated back to the profitable entry sedan and gasoline fired sports class. With plentiful and relatively affordable gasoline, consumers were not purchasing enough diesel engine equipped automobiles to justify the retooling and marketing expense for domestic and foreign import manufacturers.

So what killed the advancement of the diesel fueled automobile in North America, and why don’t we see more of them on the road today? Let’s take a look.

With all major domestic and import manufacturers pushing “clean diesel” technology on the American consumer, why is it that Honda has not introduced an entry level diesel powered sedan to the North American market?

My guess is E.P.A emission standards. However, I could be wrong. Manufactures including Audi,Volkswagen, Mercedes Benz and 2013 entry Chevrolet, have met and surpassed E.P.A. exhaust emissions standards with “clean diesel" technology. Some have successfully sold diesel powered passenger cars in America for decades.

While Honda does offer the 60 mpg Honda Civic i-DTEC in Europe, you won’t find it on the streets and highways of North America. Granted, a gasoline fired Honda Civic Si is claiming upwards of 40 mpg, but the DTEC has fuel efficiency ratings approaching 60 mpg.So why go to diesel fuel, especially on the West Coast where #2 diesel approaches $4.60 per gallon.15 to 20 % higher than “regular” grade gasoline? For me, the note worthy statistic here is that “clean diesel” technology is producing fewer measurable pollutants than its gas counterpart.

Could consumer perception effect Honda’s decision to hold off on entering the North American market?

My research indicates that Honda’s hesitancy to enter the North America diesel market may be one of math, not E.P.A. concerns.

American automobile sales records( D.M.V.) indicate that fewer than 2.5% of car buyers purchased a diesel powered vehicle prior to 2012. However, this trend may be slowly changing.

With the current offering of “smart” and “clean”diesel technology, refined, low vibration, low noise and high average high mpg ratings, diesel power is gaining market support in the younger buyer demographic. “ Bio Diesel is as trendy as tofu and gluten-free wheat bread in this Eco-awareness, low impact crowd, and the modern age Echo Tech and clean technology diesel automobiles will burn it. And, who doesn't like the idea of an engine that may live past the 200,000 mile marker?

In 2012, Honda announced that it would most likely be 2015 before Honda of North America offers a diesel powered sedan of SUV to U.S. consumers. A rather ' stand back and wait' commitment from the company that brought you the 2014 Honda Civic Si sedan and coupe.

In the mean-time our counterparts all over the world are driving metric quality, affordable, high mileage, low polluting “Earth Dream” clean diesel powered Amaze,Civics and CR-Vs. With Chevrolet,Mazda and Volkswagen offering new diesel powered models in 2014, has Honda missed the boat?

This question's for you , the reader. I’d like to read your opinion, always welcome here at Torque News.

Aaron Turpen wrote on November 18, 2013 - 5:31pm Permalink
The Chevy Cruze Diesel will likely answer the question of whether or not there's a demand. It's nicely done, drives very well, and is about this same size. By all accounts it should do well, so we'll see.
Bill Burns wrote on November 18, 2013 - 8:36pm Permalink
I had an 84 D 190 and loved it! No matter how I drove it I always got 30 MPH in town and normally 42 MPH on the highway. Once I got 47 MPH approaching Iowa from the Rockies. One of the problems is that diesel is to high in cost. Extra taxes are there to cover truck damage to highways in many states. I understand that our cracking method in the US is less efficient that that used in Europe and therefor more expensive. If this is true the oil cos. need some pressure put on them. Why not diesel & electric. That milage would be hard to beat but I don't see any such combination yet. Why not???
Aaron Turpen wrote on November 19, 2013 - 1:02am Permalink
VW spelled it out last year. Cost. When you build a diesel vehicle, there is a cost premium due to the higher cost of the powertrain (more robust engine, higher cost of after-treatment methods for emissions) and another premium for the hybrid powertrain (electrification). A diesel-electric hybrid has both premiums is thus prices itself too far out of the market. Diesel costs more at the pump, but has more energy density than gasoline, which is why it offers a higher MPG than gasoline. I did the math a couple of years ago on the cost vs. benefit of a Passat TDI versus a gasoline version and it was significantly cheaper to go diesel over time. For those who primarily drive on the highway, it also beats a Volt and several other hybrids.
Parks McCants wrote on November 19, 2013 - 10:42pm Permalink
Thank you Aaron for your thought provoking commentary. I'm still amazed by the 20+ mpg that I average on the highway in my Dodge Turbo Diesel 2500. But I must admit, living on the West Coast, that fuel prices approaching $4.80 per gallon has left my truck parked most of the time. On the other side of the cost equation, other than standard maintenance, tires and front end ball joints and tie rods, with 200,000+ miles on the clock, my engine and drive-line maintenance costs per mile is nil. Love it.
Aaron Turpen wrote on November 19, 2013 - 11:06pm Permalink
Your problem with the Dodge is that even with diesel, it's probably not getting better than 25mpg. The Passat TDI I test drove for a week consistently returned 43 mpg and the Mazda6 Diesel coming in a couple of months should better that while the Chevy Cruze Diesel does well too. Gas where I live is currently at $3.09/g, diesel at about $3.98/g and CNG at about $1.92/ge. Where I live, an EV is not realistic (when asked, I describe my house as "90 miles from Walmart").
Parks McCants wrote on November 21, 2013 - 9:19pm Permalink
Aaron... Are you stalking me? Juuuus kidn' Actually, I'm pretty damn happy with an 8300 lb gvw 4x4 that averages 20+ on the freeway.. It's all relative. Thanks for dropping by..
Parks McCants wrote on November 19, 2013 - 10:33pm Permalink
Good question Bill. On the West Coast there are only 3 refineries that produce off -road and # 2 automotive diesel fuel. One of those three is generally in -shutdown due to maintenance, repairs of modernization.In my most qualified opinion( worked for Standard Oil in a past incarnation,) the price of diesel fuel is kept at an artificially high level by the refiners. As to road tax? I don't know that diesel is taxed any higher than gasoline. But I'd have to research that a bit. I believe the " cracking" process to be the same in Europe. However, the demand for auto grade diesel is higher due to the increased popularity of diesel fueled autos.
Aaron Turpen wrote on November 19, 2013 - 11:10pm Permalink
It's very likely that the price is being kept high by regulation, not refineries. In most of the left coast, it's nearly impossible to build anything industrial, so most refineries that exist are grandfathered rather than new. It's the same with electricity, which is why California imports so much from states even as far away as mine (Wyoming).
Parks McCants wrote on November 21, 2013 - 9:22pm Permalink
Could be Aaron... Or.... perhaps it's supply and demand. Who knows? I live in a tree in Western Oregon.
Aaron Turpen wrote on November 21, 2013 - 10:25pm Permalink
Not too sure. When I drove a truck over the road, we would nearly always fuel before entering California because prices there were consistently very high. Common parlance for truckers in reference to the I-5 freeway is "the Commie Corridor" because of the stupid 55mph trailer speed limit and high fuel prices. :)
Parks McCants wrote on November 23, 2013 - 12:56pm Permalink
I agree it's painful...Tough to make a living by the mile.
Parks McCants wrote on November 21, 2013 - 9:23pm Permalink
Could be Aaron... Or.... perhaps it's supply and demand. Who knows? I live in a tree in Western Oregon.