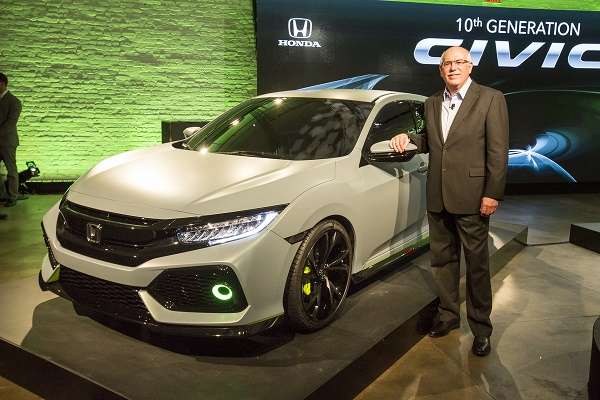 Hey, you wanted a 6-speed manual transmission, turbocharged Civic option -- you got it!
Advertisement

As announced by American Honda’s Mr. Jeff Conrad in New York on Tuesday, Honda engineering just stepped up its end game. For Honda fans that prefer manual shifting (Honda tells us that’s fewer than 6% of all young American drivers) Beginning in the Fall of 2016, all 10th generation Civic variants will be made available with a 1.5 Liter 174 horsepower Earth Dreams ™ engine and 6-speed manual transmission option.

We’ll assume that this specification option will coincide with the release of the 2017 Civic 5-door hatchback to North America. So, rather your style preference is Coupe, Hatchback or Sedan, all variants will come to market with a turbocharged engine/ manual transmission option. Personally, I’d like to see a paddle shifted, CVT option.

This is welcomed news for the “tuner” that resides in many Honda fans, young and old. There's nothing quite like holding a gear and hitting the rev-limiter with a clutch actuated gearbox. It’s pure old-school high revving Honda at its finest. We experienced Honda’s 6-speed manually shifted turbo Civic in San Diego.

That’s right, I’ve driven both turbo engine/transmission options. And, according to the “experts” as shared Tuesday by Mr. Conrad, what we discovered behind the wheel of 2016 Civic turbocharged Touring is that the torque comes on at 1800 rpm and straight-lines to 6800 before dropping off. We found triple zeros on the back roads of Malibu, California.