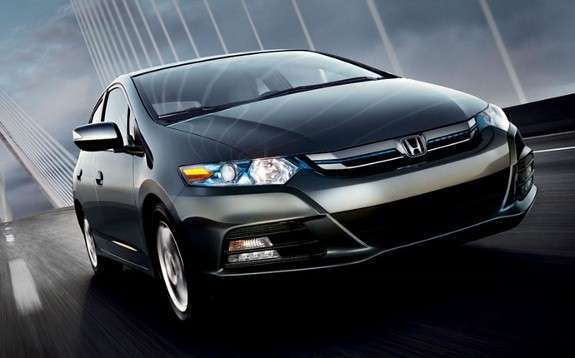 As predicted by Torque News back in December, Honda will discontinue production of the original Honda Hybrid. We discuss why Honda has discontinued the lowest priced Hybrid in North America.
Advertisement

We've spoken with several “Insight” owners of late. The commonality shared by this widely diverse group is that they love the car. Unfortunately, looking to 2013 sales numbers at fewer than 5,000 units sold in North America, Honda could no longer financially justify the import of a 15th model year.

Mary Griffin of Eugene, Oregon traded in her Acura T.L. for a 2013 Insight. The car is a nice looking light powder blue with plenty of chrome accent. We spoke with Mary at a local shopping center; she was happy to share her ownership experience with Torque News- Honda.

While we find the prospective performance transition from an Acura T.L.(260 hp) to the mild-mannered Insight(98 hp) to be a bit deflating, Mary assured Torque News that the Insight provided more than adequate performance while averaging 38 mpg around town.

Living in a hilly neighborhood, Mary believes that her average in- town mpg would be higher on flatter terrain.

Where the car shines for her is on a bi-monthly commute to Seattle Washington. Mary can make the 290 mile drive on 6.5 gallons of unleaded regular gas. “That’s why I bought the Insight.”
“ Yes, It does have to work a bit harder when passing at highway speeds and climbing steep grades.” But, I rarely have to downshift, and I don’t miss the stiff suspension and seating of the Acura T.L.,” says Mary.

So, what happened to the sales momentum of the Insight?

According to American Honda Motors, the Insight will not be returning in 2015.

Pointing the the success of the i MMD powered 2014 Accord and Accord Hybrid, Honda has committed to the expanded use of the two motor electric hybrid system throughout the line.

We believe that i MMD “Earth Dreams” technology represents the future for affordable, hyper-fuel efficient hybrids and will be utilized in the 2016 Odyssey, Pilot and Ridgeline.

Short of the timely implementation of FCEV , i MMD is proving to be a viable path to near zero emissions while meeting or beating legislative mandated fuel efficiency. As reported earlier, the Japanese model CVT Fit Hybrid has recorded 70 mpg in real world testing.

Honda states that the Insight will be available in North America through the end of 2014.

If you’re fortunate enough to locate a 2013 or 14 Insight on the back lot of your local Honda Dealer, you will find the car to be a very viable, affordable ($18900) alternative to an Accord, Civic or Toyota Prius “ C”. While they’re a bit “ dogie” on the performance end, the car screams Japanese build Honda quality while delivering a very reasonable 40+ city mpg.

Parks McCants wrote on March 2, 2014 - 7:26pm Permalink
while I'm waxing nostalgic about the "original" Honda Hybrid, I'm reminded by my associates that the current generation outweighs the original by 800 lbs or so. It's not the same car. Once the mileage leader of the automotive world, the Insight lost ground to the Toyota Prius never to recover sales despite a major redesign in 2009. There goes the lowest priced Hybrid in North America.