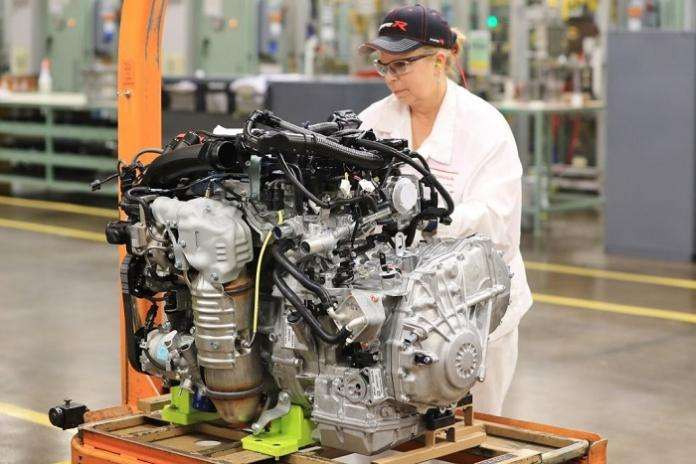 At the heart of every Honda car and light truck beats an engine assembled by people just like you and me. In Anna, Ohio some of the best long lasting gasoline engines on Earth are produced. Today, the Anna, Ohio Engine Plant hit an impressive milestone, a number with 6 zeros in it.
Advertisement

Honda, the largest by volume engine manufacturer in the world proudly announces a milestone for its Anna, Ohio engine plant. 25,000,000 is an impressive number. The made in America Honda Accord tradition continues.

If you drive a non hybrid Honda Accord, the engine was most likely produced in the United States. The same is true for Honda’s 10th generation Civic world car. With turbocharged Earth Dreams engine technology now powering the majority of Honda new car offerings, the Anna, Ohio engine plant re-tools to the tune of $47 million, to facilitate the anticipated increased demand for 2018 Honda Accord, the direct injected, turbocharged VTEC 1.5L, 2.0 L, and the Atkinson Cycle 4 cylinder gasoline engines that power the reinvented Accord sedan lineup.

2018 Honda Accord: Made in America for domestic and export sales

As earlier reported by Torque News, American Honda has big plans for the reinvented 2018 Honda Accord. In fact, manufacturing capacity has been increased to facilitate heightened demand for the first turbocharged Accord in the maker's history. The manufactured in Ohio Accord carries the design language of the reinvented Honda Civic into the near premium midsize sedan class, with standard features once reserved for luxury sedans. I drove the 2018 Honda Accord lineup in New Hampshire last month, most impressive

According to Honda News: The elite, precision engine builders at the Anna, Ohio engine plant reached a milestone with the deliver of engine # 25,000,000 to the production line, it took 32 years. According to Honda, based on todays rate of production, it will take but a mere 21 years to build 25,000,000 more. To date Honda has invested $2.7 billion in the Anna, Ohio facility.

Dedication drives quality of workmanship at Honda. Engine assembly is a thankless job. Thank you! Check out LInda Lentz in the photo above. Dedication personified

Elon Makes a Cybertruck Statement With an Action, But Quiet in Words
Tesla's Record Month in China: Doubled Registrations in March 2021
END_OF_DOCUMENT_TOKEN_TO_BE_REPLACED