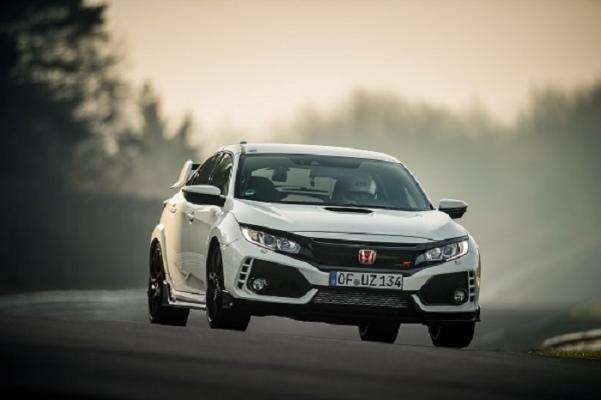 Of course, we'd never race our Civic Type-R on the street! Wednesday found one of our fellow CivicX members sharing the MSRP of a US market bound 2018 Honda Civic Type-R. It’s cheaper than many anticipated.
Advertisement

The boys at CivicX.com are becoming very proficient at beating Honda Public Relations on time sensitive announcements. Such may be the case with the manufactured in England, 10th generation world platform 2018 Honda Civic Type-r, or so it would seem. Here’s what I thought Civic Type-R would cost.

Caught on an undisclosed East Coast doc, (Baltimore) and headed for markets unknown (Chicago) and down to Southfield Mi, the fully loaded Championship White on Black 2018 Civic Type-R carries a sticker MSRP of $33,900 plus a destination fee of $875 -- bringing the before tax, license fee, and dealer markup (if any) to $34,775, -- darn reasonable for a record setting, turbocharged, 306 horsepower Honda Civic supercar.

I’ll be the first to admit that the first Civic to wear the Type-R moniker in the United States, arrives for less money than anticipated -- although, sales tax, licensing fees, dealer preparation and markup (if any) and, a personalized option or two, including equipping Type-R with some high speed all-weather tires, will push the price tag within shouting distance of $40,000. We'll see where retail price lands in a week or so. How many, how soon, and when? Only Honda knows the answer to those questions. And as of today, they're not saying. Honda? For the rest of us, there’s 2017 Civic Si.

Our collective hat is off to CivicX member Zdh for nabbing the preview Monroney sticker photo. Cheers.