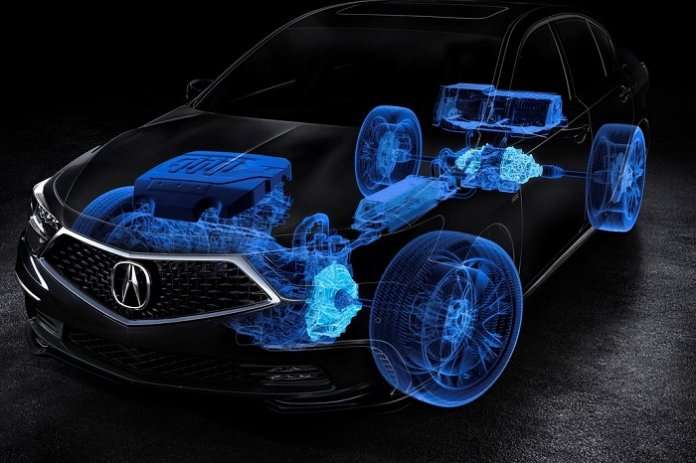 What Acura News refers to as the “most sophisticated and best Acura sedan ever,” makes its public debut this week at Monterey Automotive Week. Heavily influenced by Acura’s Precision Performance Concept show car, and Acura's 2017 NSX Hybrid Supercar, the redesigned RLX is sure to earn some attention from a most discerning group.
Advertisement

Following the successful launch of 2017 Acura NSX, MDX Sport Hybrid, and Acura TLX A-Spec, Acura unveils a rather major renovation of what I consider to be one of, if not, the most underappreciated luxury sedans available to North America. I’ve spent much seat time in Acura RLX Sport Hybrid Sedan, and despite the lofty MSRP, (by Acura standards,) consider RLX to be an extreme tech-rich, unique looking, performance bargain. Read our latest RLX Sport Hybrid drive review here.

Acura RLX has been a low volume luxury segment seller

Despite high build quality, class leading active safety features, and measurable fuel efficient drive performance, Acura RLX has not sold well in the U.S.. Acura hopes to change the sales trajectory of its flagship sedan with what looks to be a very dynamic, visually appealing redo.

Acura informs Torque News: 2018 Acura RLX may be viewed at several locations on the peninsula during Monterey’s premier auto extravaganza. Read Acura’s press release here. As to specifications and MSRP, that’s yet to come. We do know that the 2017 RLX Sport Hybrid one engine, 3-electric motor drive train, and SH-AWD will carry over from 2017; with a performance tweak or two learned from NSX and MDX sport hybrid. For 2018, most of the uptick will be visual, with Acura’s new found design language carried into the next decade.

Note: Acura simplifies RLX “build and buy,” purchase platform by reducing RLX trim variants to Two. Brilliant! For those not wishing for hybrid power, the 310 horsepower V6, 10-speed motivated RLX sporting P-AWS (precision-all-wheel-steer,) will be the bargain in the lineup. We anticipate Acura holding RLX beginning MSRP to $56,500 or so. RLX, Acura’s only Japanese manufactured sedan should be available in the U.S. sometime in late Fall 2017.

LG's New EV Battery Plant Is a Welcome News for Tesla
Tesla Giga Berlin's New Hurdle: It's Not Only the Gov't, but Now Tesla Itself
END_OF_DOCUMENT_TOKEN_TO_BE_REPLACED