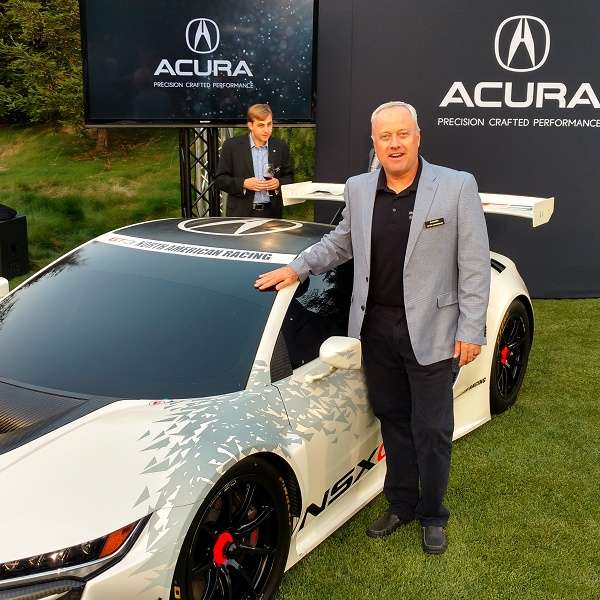 Granted, Peter Cunningham may be the most amiable team owner and driver engaged in Pirelli World Challenge Series racing. He has a lot to smile about these days.
Advertisement

Peter’s (P.D. to those fortunate enough to know the man) latest project is the race development of Acura’s 2017 NSX derived GT3 car. This is the second time around for a man that was there with NSX race development back in the 1990s.

While attending Acura’s media meet and greet in Carmel Valley, California, I dined with Peter Cunningham, Art St Cyr of Honda Performance Development, Dario Franchitti of Indycar fame, and our friends at Honda and Acura public relations. They're all just a little giddy when it comes to NSX, and rightfully so -- There’s nothing else like this manufactured in Ohio gasoline, electric hybrid supercar on the road today.

It was one heck of a night, and a precursor to what would be a life changer for me and other auto aficionados attending Monterey Auto Week. There sat in front of me, not only my radiant wife Ms Nancy King, but a pearl white, black rimmed 2017 Acura NSX hybrid supercar, and a track ready NSX GT3 car.

So, in usual form, I put on my reporter’s hat and cornered P.D. Cunningham for just a moment or two. Superstars are busy, Peter’s an Acura superstar of the highest caliber, yet ever approachable, amiable and brutally honest.

We talked about Ryan, TLX, and the future of Acura racing

P.D. when asked a question, will tell you what he can tell you! A Honda development partner for more than 2 decades, while Cunningham is an insider, first and foremost he’s a team player, business owner, and a tough competitor. And frankly, P.D. is not going to compromise the future of the Acura NSX GT3 program with an out of context answer, or a spill of the beans , if you will -- as to the future plans for NSX GT3, RealTime, and Acura Racing. He did share this snippet with me at 2015 SEMA Show Las Vegas. Now I know that P.D.’s fully entrenched in the track developement of NSX GT3. He vacated his TLX GT seat to do so. We also know that Indycar’s Dario Franchitti was hands-on involved in the handling dynamics of the 2nd generation 2017 Acura NSX. I drove the car here.

So, the NSX GT3 race development program is as serious as a heart attack. In my opinion, Acura TLX GT is in it’s final year of Pirelli World Challenge competition. While Peter and Ryan have done a very commendable job of bringing the TLX program up to speed, TLX is just a bit outgunned in a field of supercar coupes. And frankly, I’m not sure that TLX GT, although finishing in the money several times in 2016, lived up to the expectations of Acura and RealTime.

Although P.D. gave me a Santa Claus like twinkle of the eye, a nod of the head, and his world famous smile as I asked this question: “ Will RealTime Racing be campaigning the NSX GT3 Car next year?” He didn’t say no. Check out the latest NSX GT3 car video.

Toyota vs Tesla: Which Stock To Buy These Days
For Some Former Daimler Managers Daimler Is Authority, While Tesla Is Like a Startup
END_OF_DOCUMENT_TOKEN_TO_BE_REPLACED