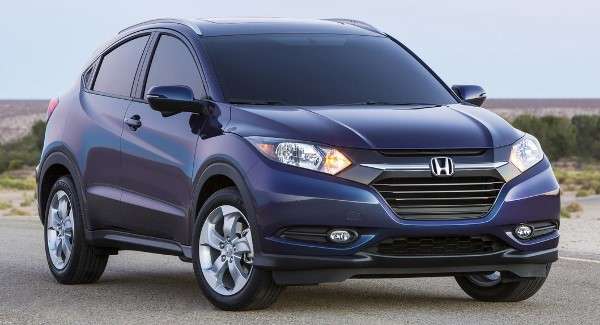 Take a close look at the photo at the top of this article. We believe that 2016 Honda HR-V will be a best seller within weeks of availability. Why? it’s simple: Exceptional value, great looks and multi-generational appeal.
Advertisement

Honda transformer-like utility as exhibited in the 2015 Fit is featured in the all new 2016 HR-V.
We've viewed it, sat in it, and will drive HR-V before months end; we like it! But will HR-V be good enough, advanced enough to dominate the hottest, fastest growing automotive segment in North America?

With Fiat/Jeep, Mazda, Subaru and others introducing affordable and sport-like compact SUV and crossovers, we look to the Spring release of 2016 Honda HR-V. Will this smaller than CR-V crossover featuring AWD option and mild off road capabilities be the Next Honda to take the compact sports-segment by storm? Or, will 2016 HR-V encounter market resistance on the road to segment prominence if not dominance.

2016 Honda HR-V may be the next North American Honda-built success story in a segment referred to by many industry insiders as “White Hot.” But, HR-V is not without serious competition. Every maker selling in Americas car market wants a piece of the action within a very competitive market. Yet, we don’t find an offering ‘exactly like 2016 HR-V.” There’s only one, and Honda makes it.

With a calculated throw of the dice, Honda rolls a winner

As U.S. auto manufacturers attempt an accurate, future-forward read on an ever changing world and U.S. economy, Honda’s sitting at the top of the subcompact and compact market with # 1 selling compact sedan Civic, and record setting 5 door compact hatchback 2015 Honda Fit.

2015 Honda Fit and CR-V sales are running at record highs, despite a recovering economy, ease of consumer credit, an uptick in pickup truck and SUV sales and cheap plentiful fuel.

In-fact, as stated earlier, we believe that Millennials and others considering the purchase of a new vehicle, may not be buying into the long-term-cheap-fuel-spew frothing from the lips of commodity speculators; they’re holding the line on economic sensibility learned by most folks financially impacted during the last world-wide economic recession, and opting for a smaller, fuel efficient, tech-rich personal transportation conveyance. O.K, let’s get off of the soapbox!

We like HR-V for the same reasons we like Honda Fit: A bigger car ride, utility and fun-drivability. While spending some serious seat time in 2015 Fit, driving the streets and highways of Los Angeles, we discovered a small automotive transformer featuring mini-van utility, sports-like driving characteristics and exceptional fuel economy.

The Honda Fit platformed HR-V takes Fit-sensibility to the next level, through an exceptional coupe-like-premium-interior driving environment, aerodynamic body styling, an extensive list of standard featured personal connectivity and active safety features. You’ll also discover an optional all-wheel-drive feature, and that’s where the niche is created for 2016 HR-V; just below CR-V in size and price point. Discover Honda HR-V here.

With our initial coverage of the HR-V prototype way back in 2013, we read from several readers(of all ages)as to their wish and want of a smaller, Honda AWD hatchback. On the collective wish list was: “Ease of parking, city maneuverability, exceptional fuel economy and style.” We spent some quality time with 2016 HR-V at the Los Angeles Auto Show and discovered a stylish crossover of surprising interior volume and transformable utility. Besides, this 6 ft, 5 inch journalist comfortably fit in HR-V without seat-tilted-back compromise. We like that.

For us the icing on the cake is a 1.8 liter 4 cylinder engine and CVT transmission pairing that consumes a bit less gasoline, while producing greater usable horsepower and mid-range torque. In-fact, 2016 HR-V is EPA rated at a combined 31 mpg, the highest fuel efficiency in its segment. While we’re not privy to HR-V pricing until the end of February, we anticipate pricing for a well equipped HR-V FWD to land slightly above that of a mid level trimmed 2015 Fit.($18,000+)That’s just an educated guess.

Mark wrote on February 17, 2015 - 2:03pm Permalink
Good article, but you are mistaken on the mileage rating you stated. The HR-V is rated at 28mpg City, 35mpg Highway, with a combined rating of 31mpg, not 36 as you stated. Maybe you were listing the Fit's combined rating?
Parks McCants wrote on February 17, 2015 - 8:52pm Permalink
Thank you Mark.
Dan wrote on February 17, 2015 - 5:05pm Permalink
Good article, but a well-equipped HR-V will not be $18k. It'll be more along the lines of $25k for a well-equipped HR-V, which is still shy of a CR-V.
Parks McCants wrote on February 17, 2015 - 8:48pm Permalink
Good day Dan. Price and specifications for Honda HR-V have not(yet) been released by American Honda Motors. My price reference is to a 2 wheel(FWD) drive variant. You may be right on the money for a well equipped all-wheel drive version. we'll find in early March. Thanks for reading.
HondaPro Jason wrote on March 10, 2015 - 4:50pm Permalink
I agree this new Honda is what the people really want. I had the rare opertunity to drive it and I was very impressed. I belive it checks all the correct boxes for a Coupe, Sedan and CUV. It's the perfect combination and Honda did everything right.
Parks McCants wrote on March 10, 2015 - 9:42pm Permalink
Welcome Jason. We will compare drive impressions in April(long-time) Hope you're doing well. We love your Video's at TorqueNews-Honda. Check it out!https://www.youtube.com/user/hondaproJason