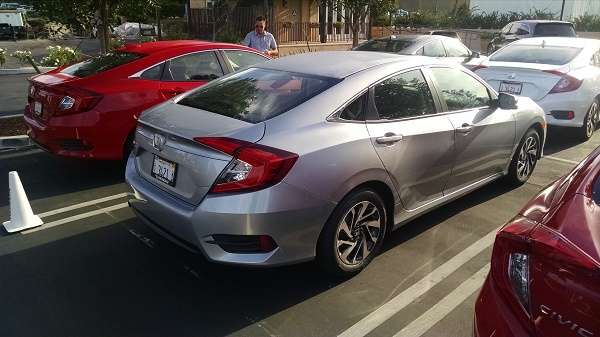 Will Monday’s 2016 Honda Civic drive review be anticlimactic in the wake of the most spec- leaked Honda in recent memory?
Advertisement

The truth is, auto writers, industry analyst and company employees who attend new model roll outs are held to a high standard as to press embargoes imposed by the maker out of time-line fairness to the media.

Earlier in the game, new vehicles are developed and road tested under cover of disguise, in the hopes of holding the competition at bay. In the automotive arena, a few months can make the difference between ground-breaking design, and want- to- be model copy-cat. This is when a flurry of mystery-spy-photos begin to proliferate the WWW, spawning speculation and ‘what ifs,’ along with a proliferation of non-news-auto-babble.

We all do it to a certain extent

So goes the same for Honda dealers. They’re provided with MSRP, performance specifications, colors and trim options months before the scheduled dealer delivery of a pending new model. This makes sense when ordering one’s inventory, planning for future sales and weighing one’s floor cost against current economic events, with the hopes of greater sales on the heels of a new model release.

Hey, those dealership price sheets from Honda are marked “Confidential” for a reason

Sunday found some jackass from dealership parts unknown, publishing the wholesale and list price of the 2016 Honda Civic sedan in all trim variants. Hey! if you didn’t catch it, good, I’ll list it here tomorrow. But the bottom line is, as promised earlier by Honda, 2016 Honda Civic sedan will arrive at North American showrooms with a beginning MSRP of less than $200 Obama Bucks over 2015 Civic pricing.

To date, you may know everything we wish to know about 2016 Honda Sedan, less “ initial drive impressions.” And frankly, an initial drive impression is simply the opinion of an auto journalist, much like myself that’s shared a 2 or 3 hour drive and ride session with a fellow journalist. They are not a comprehensive long-term assessment of the subject vehicle, nor are they meant to be.

So as of this posting Honda Civic fans know that 2016 Civic will not disappoint as to presenting a more premium look, greater interior space and personal connectivity, expanded standard and optional active safety features, greater acceleration and fuel economy. We’ve seen 2016 Civic in person, driven the car, and frankly, love it! For a Civic that is… look for our “first impression drive review and expanded 2016 Civic sedan report here Monday.