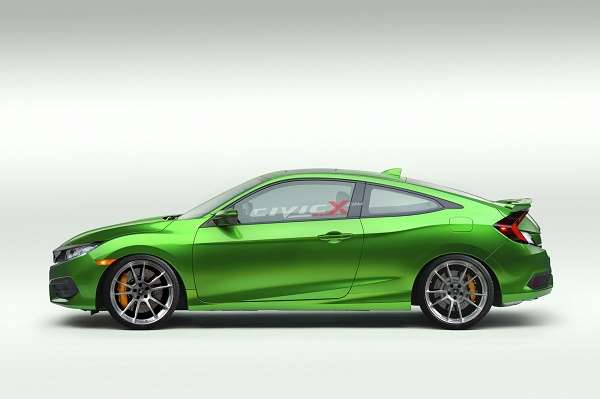 Thanks to our friends over at CivicX.Com, we step into the future of 2016 Civic Coupe mild-customization. Love it!
Advertisement

Talk about jumping the gun just a bit. 2016 Honda Civic Coupe is not due to hit the dealership showroom until spring 2016. No worries, Honda Coupe fan’s mental wheels are turning as to what mods will take Civic Coupe to the top of the compact sports segment.

Arguably, I’m one of those Honda enthusiasts that panned 2016 Civic Coupe, just a bit, on its initial public reveal prior to the opening of the 2015 Los Angeles Auto Show. On first look, I found the coupe design to be a bit disproportionate, front overhang and rear end heavy. I’m over it.

Granted, the Civic Coupe design has grown on me a bit since first sitting in the driver’s seat, and spending some personal quiet time with what is arguably the most dynamic Civic Coupe in Honda history. You may read my initial impressions of 2016 Honda Civic Coupe here. Personally, I hand it to American Honda Motors for presenting the most progressive color pallet to date. But, as is often found in a world of show inspired mild custom Tuners, the 2016 Civic Coupe Concept inspired production Civic is the perfect pallet for personal customization.

A custom color and wheel combination or two

I find Honda and Acura designs to be color sensitive, with some models and variants looking fantastic coated under one hue and not so much under another. It’s the way that the lights bounces off the organic and hard edged body design of Honda’s soon to be best seller.

2016 Civic will be responsible for returning the once subcompact icon that started the Japanese auto craze in North America to #1. Yes, Civic is a bit supersized today due to public demand, safety regulations and a consumer yearning for greater passenger capacity, comfort, performance, ride and safety. Torque News drove turbocharged 2016 Civic Touring Sedan down the twisty two lane road that is Malibu Canyon and walked away smiling. You may read our first drive impressions here. Also, take a look at a handful of aftermarket color and custom wheel combinations as presented by CivicX.Com. Well done guys!