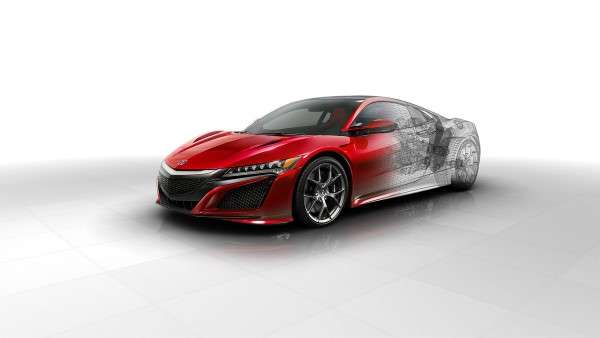 The short story is that 2016 NSX engineering from an automotive developmental view point is very exciting, and in the near future of performance automotive design will save lives.

But that’s just a small part of what Acura rightfully labels the “New Sports Experience.” Without a doubt, there’s nothing else like NSX on the road today.

In the 2015 Acura, Realtime Racing TLX-GT, a similar engine produces 500 + horsepower. Although Acura has not divulged production engine internal specifications and power output for NSX, we’d anticipate something in the neighborhood of 450 horsepower coming out of the V6, and an additional boost in horsepower and torque from the combined regenerative and front drive electric motors.

We predict a combined gasoline/electric horsepower rating approaching 550+. Usable torque output will be off of the charts; as required to effectively compete with BMW, Ford G.T.,Mclaren and Porsche ,all presenting viable contenders in the supercar segment; with a twist, NSX is a supercar bargain.

What we've read of the Acura press release is astounding as to NSX-related automotive engineering and moto-technical breakthroughs. When released to world-markets sometime in late 2015, Acura NSX, a car of many first, will shake up the supercar sport segment.

NSX, Honda and Acura Division’s greatest technological automotive advancement to date, is a wake up call to the auto industry; and a high performance vehicle presenting broader implications than the sum of its parts. No hype, NSX is arguably groundbreaking and bench-setting.

Acura will sell as many NSX supercars as they can produce.The reasoning here is sound, and based on all current automotive manufacturing practices and advanced propulsion technologies. Frankly, we’re not sure that Acura can hold the MSRP bellow $200,000. The development cost of NSX is as staggering as its presented technology.

Outside of the world of auto racing, and we’re talking less than a handful of micro manufactures, NSX will be the first high production street legal, single engine, 3 motor, smart-handling-all-wheel-drive-hybrid-supercar available for public purchase.

looking to the released specifications, there is no other mass produced, micro produced or hand built supercar like NSX on the road today; that we know of

2016 Acura NSX presents the future in automotive-sports propulsion and beyond. Setting the brute-power to weight ratio aside for a moment, several new technologies come to the automotive industry through the introduction of NSX: Super frame rigidity, new casting (ablation) technologies, multiple composite frame construction, the world’s first production 1 engine, 3 motor gasoline hybrid, and much more than we can share with you in one article.

As Acura states it: “ 2016 Acura NSX is thermal, aerodynamic engineering re-imagined.” We like that!, and believe that NSX represents a greater engineering and technology development accomplishment greater than the sum of it’s components. 2016 Acura NSX drives frame, torque and high-heat transference technologies into the future, and that’s just the beginning.

JeffS wrote on April 24, 2015 - 7:52am Permalink
Good morning Parks, waiting with baited breath to see the final specs and pricing. Hopefully you will have the opportunity to take one out for a spin and pass along your impressions, (If you can manage to get regain your composure after taking this ultimate joy ride out for a flog). I hope Acura is able to hold the price @ about 150,000.00, but have my doubts. @ 150,000.00, for what we know 'bout the car, would be the deal of the century, closer to 200,000.00 and still sounds like a bargain, but will probably put it out of reach for many who are considering, (such as myself). At any rate, the tech. developed for the NSX, (like the turbo tech), will surely trickle down to the other offerings from Honda/Acura and that is a good thing throughout the line. The closest competition I can think of, in terms of the technology used, is the Porsche 918 and the McLaren P1, both about a million. When viewed from that perspective, makes the NSX's ballpark price sound, "Stupid cheap", (in comparison, still a nice chunk of change). Looks like Honda has got it's mojo back, in a big way, ,from the top of the line to the bottom. That is a good thing for the entire industry as it seems Honda is intent on turning up the heat. The past, "Golden age" of the Auto is being replace by the, "Platinum age". It just keeps getting better. Be well, All Best.
Parks McCants wrote on April 24, 2015 - 3:04pm Permalink
Thanks JeffS. Yes, Acura will conduct a drive review at the Honda Performance Center in Marysville, Ohio this summer; I'm invited. The challenge for me at 6 ft 5 inches may be shoe-horning into NSX. Honda tells me that I'll fit the cockpit, but it will be a tight fit. None the less, this old Fiat 1 liter Abarth driver will make it work. I did drive the original NSX back in the day; knees to dash, head to ceiling... Well worth the effort. The NSX drive technology and resulting performance is mind blowing. I'm with you on the price-point. It's not a Porsche 918, but should give the supercar segment a run for the $. Acura's pretty damn confident on the estimated MSRP. We'll see where she goes!
JeffS wrote on April 24, 2015 - 3:52pm Permalink
Of course the Porsche and McLaren are different animals, but the tech being used is quite similar. Now, you being at 6'5" and a Honda Fan speaks volumes about how much you like Honda/Acura. I would imagine the Civic and ILX are a, "tight" squeeze. I also had the opportunity to drive a 1st Gen. NSX. At the time, the car that delivered anywhere near the driving experience, for me, was a 911. The Acura was much easier to push to it's limits, (more forgiving), once the Porsche approached it's limits it could bite you quickly and without much warning, (my understanding is the Porsches aren't so squirrely anymore, haven't driven one in decades). I digress, when one looks purely to the performance and technology your $ is buying, it's hard to justify the disparity between the likes of a 918 or P1 to the NSX. The anticipated performance stats of the NSX look pretty amazing and should put it in some pretty rarified company. On top of that, the thing looks killer, with every vent, scoop and line having a real purpose and not going, "overboard" with the tech or bells and whistles. No doubt, you'll find a way to squeeze yourself into it. My guess is you may have to contort your old bones to get into and out of it, (no sympathy here, just envy), but once seated you'll find your IDEAL driving position and be quite comfortable. Look forward to your driving impressions, if they are able to pry the "Fob" out of your hands. Have a nice weekend Parks.